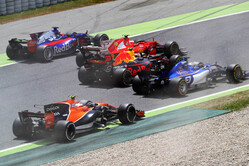 While the new regulations for 2017 were set to increase cornering speeds helping to create the fastest ever cars to grace the F1 grid, the failure to address aerodynamic grip meant that the age old problem of overtaking remained.

From the opening race in Melbourne right through to Abu Dhabi, drivers complained that as soon as they got within a certain distance of the car ahead, grip went out the window meaning that there was little hope of making a successful pass.

In calculating its figures, Pirelli states that "an overtaking manoeuvre is counted as one that takes place during complete flying laps (so not on the opening lap) and is then maintained all the way to the lap's finish line. Position changes due to major mechanical problems or lapping/unlapping are not counted".

Azerbaijan witnessed the highest number of overtakes in a dry race, while at 31, China featured the most in a wet race. The Russian Grand Prix featured just one successful pass.

Unsurprisingly, Daniel Ricciardo made the most successful passes, the Australian carrying out 43 over the course of the year, with 13 during the British Grand Prix alone.

Having been passed just twice, Max Verstappen and Lewis Hamilton are the drivers who were overtaken on the least number of occasions this year, while over the course of the year rookie Lance Stroll made up a total of 36 places on his opening laps.

As well as being the team that carried out the most overtaking, Red Bull (65 moves) was also overtaken the least, the Austrian team losing just 11 places, 9 for Ricciardo, and 2 for Verstappen. The Ferrari duo was also on 11 places, 8 for Kimi Raikkonen, and 3 for Sebastian Vettel.

With 2017 featuring less average overtakes per race for any season since Pirelli returned to the sport in 2011, the Italian manufacturer is relying on its more aggressive tyres for 2018 improving the situation, though with the aero rules still unaddressed this is highly unlikely.

On the other hand, F1 has a vibrant new logo.