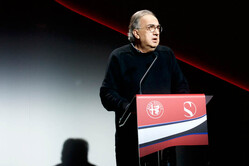 No sooner had Red Bull boss Christian Horner pointed to Alfa Romeo's return to F1 as proof that Sergio Marchionne's threat to take Ferrari out of the sport is bluff, than the Fiat Chrysler boss reiterated the threat.

"They come under the same management as Sergio so I can't believe he'd have brought Alfa Romeo in for Ferrari to be leaving in a couple of years," Horner told Reuters. "I think it demonstrates that Formula One is obviously working and creating the recognition, otherwise the group wouldn't have brought the Alfa brand into Formula One."

Not so, according to Marchionne.

"The dialogue has started and will continue to evolve," Marchionne told reporters at the press conference to publicly reveal Alfa Romeo Sauber's drivers and proposed livery for 2018.

"We have time until 2020 to find a solution which benefits Ferrari," he continued. "The threat of Ferrari leaving Formula One is serious. The agreement with Sauber expires in 2020-2021, right when Ferrari could leave.

"We have to find a solution which is good for the sport but we also have to be clear on the things we can't back down on," he insisted.

Ferrari's initial threat was based on the proposals for the new engine formula in 2018, the Italian manufacturer particularly concerned at the move towards more standard parts, a move it claims compromises the purity of the sport.

However, the bigger issue, of money, be it the more equal distribution of the prize pot or the doing away of bonuses, has yet to come.

Meanwhile, how ironic that the boss of a team that regularly threatens to quit the sport unless it gets its own way, is dismissing a similar threat from a rival.