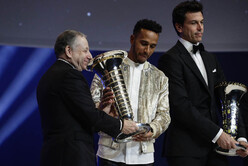 Arguably, the highlight of the annual gala show was the presentation of the FIA Formula One World Drivers' Championship Trophy to Lewis Hamilton.

The Mercedes driver lifted the trophy for the fourth time in his career, a remarkable feat that puts him level with French F1 legend Alain Prost and his rival for this year's title, Sebastian Vettel.

The Briton took nine victories this season, scoring points in every grand prix and along the way established a new benchmark of 72 career pole positions, beating Michael Schumacher's previous record of 68.

However, despite the record-breaking season, he said that he could not see himself eclipsing the German great's seven championship titles.

"It's taken me 10 years to achieve four," said Hamilton. "I currently don't have that desire to match seven, but matching Fangio would be quite cool.

"Given that I‘m going to be here for at least another couple of years, that's my goal," he admitted. "To try and at least get that. We definitely have more championships to win together."

"This has been a very challenging season for us," said Toto Wolff as the collected the FIA Formula One World Drivers' Championship Trophy for the fourth time since Mercedes return as a constructor. "We knew that we set ourselves an ambitious goal when we said that we want to defend the titles across a major regulation change.

"We raced against some very strong opponents who put up a good fight. So every team member had to work extra hard in order to reach our target. I am incredibly proud of the accomplishment and I want to thank everyone in Brixworth, Brackley and Stuttgart for their hard work."

"It's great to see the all the other motorsport champions being honoured here as well," he continued. "I know how hard everyone fought who received a championship trophy tonight - huge congratulations to all of you!"

A number of special FIA awards were handed out on the night. For a remarkable third year in a row Max Verstappen won the FIA Personality of the Year while Formula 2 Champion Charles Leclerc, recently announced as 2018 Formula 1 driver with the Alfa Romeo Sauber F1 Team, won the Rookie of the Year Award.