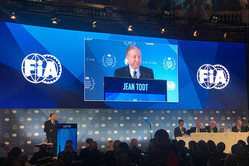 Jean Todt was today re-elected as President of the Federation Internationale de l'Automobile (FIA) at the organisation's General Assembly in Paris.

Standing unopposed, Mr Todt was handed a third term in office unanimously by acclamation, and by a show of hands.

The new mandate will see Mr Todt continue to develop the global federation of Motorsport and Mobility organisations until the end of 2021. A full list of the appointments made during the Assembly will be published in due course.

"It is gratifying to have such universal support," said Todt after accepting th presidency. "I would like to thank all of the Member Clubs of the FIA for their support. I see this as a validation of the direction the FIA has taken under my leadership, and as encouragement to continue the programme we have pursued over the past eight years."

Todt went on to outline an ambitious programme for what will be his final term in office, focusing on three key areas: innovation, advocacy and the development of a strong network of Mobility and Sport Clubs.

Expanding on the theme of innovation, he added: "Innovation is essential if the FIA is to continue to improve and take its rightful place in the world as the leader in Mobility and Motorsport development," he said. "To encourage this, we propose to establish an FIA Innovation Fund."

Over Todt's first two terms advocacy across a range of issues, including road safety and sustainable mobility, has become a key area of endeavour for both the FIA and its Member Clubs, and following today's vote he emphasised the need to further strengthen the Federation's efforts to reduce road fatalities and to help shape the future of clean and accessible mobility for all.

"The FIA has made significant progress globally, and is now recognised by world bodies, governments and fellow NGOs as a reliable and relevant voice on the international stage," he said.

"Road Safety continues to be a major focus through the work of the FIA High-Level Panel for Road Safety, the support and assistance of the FIA Foundation and its Chairman, Lord Robertson, and through the #3500 Lives campaign which was launched worldwide earlier this year. I am pleased to confirm that this campaign will continue to have a global presence in 2018 in order to help achieve the goal of reducing road trauma. Additionally, during this term, a new set of FIA Road Safety Awards will be instigated, to recognise outstanding contributions to achieving real progress in international road safety outcomes."

Turning to the future of Mobility, Todt stressed the need for the Federation to foster the growth and influence of its Member Clubs in defining the next generation of transportation systems.

"Our clubs are the largest consumer organisations in their country and their 80-million road-user members make the FIA one of the largest global consumer bodies. This is important because while the future of mobility is exciting, it also holds many challenges, and it is our duty to help shape it.

"We will have to deal with increased congestion in all our major cities, with the introduction of autonomous vehicles, the growing cost of mobility and with the development of new technologies in developed countries. We need to influence the direction these developments take in order to ensure acceptable outcomes for all.

"My ambition remains for our Federation to continue to strive to be the best it possibly can – stronger, smarter, more secure, more professional and globally respected."

Todt's re-election also confirms a restructured team at the helm of the FIA. After eight years as President of the FIA Senate, the body with oversight of the management and finances of the Federation, America's Nick Craw steps down from the role. Mr Craw will be replaced by New Zealand's Brian Gibbons, who has acted as FIA Deputy President for Mobility since 2009. That role will now be filled by Belgium's Thierry Willemarck, who moves from his position as President of Region I of the FIA. Graham Stoker continues as Deputy President for Sport, a post he has held since 2009.

Commenting on the new structure, Todt said: "I have encouraged the selection of a leadership team that is a mixture of the experienced and the new. The experienced will ensure we continue to respect our heritage, uphold our values and avoid the pitfalls of the past. The new faces will bring fresh, innovative thinking to our Federation. I am particularly pleased that a number of talented women have been nominated for important positions by our clubs. It is a beginning I hope will lead the FIA to embrace greater diversity and recognise and reward talent, wherever it exists."