Raikkonen insists the hunger's still there 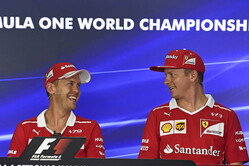 Despite a fairly lacklustre season, only managing to claim fourth in the standings following Daniel Ricciardo's retirement from the season ending Abu Dhabi Grand Prix, Kimi Raikkonen insists that he is still enjoying his racing.

Though one of the most popular drivers on the grid, even though he has none of the obviously out-going personality traits we all so admire in Daniel Ricciardo, Kimi Raikkonen remains one of the most frustrating.

His form, his pace even his motivation appear to change with the wind, and even though he is retained for 2018 it will need a season of epic performances for the Finn to keep his seat at Ferrari in 2019, particularly with Charles Leclerc waiting in the wings.

Though a known critic of much of the stuff that surrounds the job of the modern day F1 driver, Raikkonen insists that, despite the impression he might give, he is still enjoying his racing.

"I wouldn't be here or next year if I didn't have the hunger to win," he told The Flying Lap. "I enjoy racing. I wouldn't be shy to say it's the only reason. I want to be in F1. So long as that hunger is there, it's the reason why I'll give my best."

Looking back on the past season, having been given a glimpse of the Maranello outfit's pace during the Barcelona tests, Raikkonen says the Italian team didn't capitalise on its obvious step forward from the get-go.

"We started the year a bit slowly," he admits. "We had some good moments, but far from what we wanted if you take the whole year.

"We just need to put things correct for the first race," he added. "We have the speed, but there are so many things that have to be absolutely right. If you don't get things perfectly, it will cost you a lot of points."