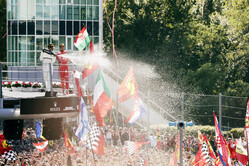 British fans who want to know what sort of free-to-air coverage they will receive next year need look no further than Italy, as it is revealed that only the home Grand Prix at Monza will be available fee-to-air this year.

While Formula One Management has proudly proclaims new deals in Germany, Spain and Latin America, little has been forthcoming about the news that fans in Italy - home of Ferrari, arguably the most popular team on the grid - will have almost no access to live free coverage this year.

Much like the situation in Britain, where both the BBC and Channel 4 found themselves losing out to Sky's pay-per-view deal with FOM, in Italy, RAI, which for many years was the main provider of (free) F1 coverage has been losing out to Sky Italia.

As recently as last year, RAI had a deal similar to that of Channel 4 in the UK, whereby it broadcast a number (9) of races live with the remainder being shown in a highlights format.

However, with Liberty rejecting the latest offer from RAI, the Italian broadcaster will have the right only to broadcast the Italian Grand Prix live this year.

In 2019, Sky becomes the sole broadcaster of live F1 coverage in Britain, with details of what will be available free-to-air still to be agreed.

Ironically, after years in the F1 wilderness, France, which returns to the F1 calendar this year, will see four race available live on free-to-air, the home event, Monaco and two others.

As Liberty continues to work on its various TV deals, it's clear that the company is keen to bring its own streaming service into effect as soon as possible, though this will do little to ease the frustration of those unable and unwilling to pay for live coverage.