Formula 1 is most popular in Europe, though the sport is seeing a growing fanbase all around the world these days. On Wednesday, FOX Sports Latin America announced that it has agreed to an exclusive new five-year agreement to secure broadcasting rights to Formula 1.

In the pact, which includes all Latin American countries other than Brazil, FOX Sports will extend its F1 coverage from 2018 until 2022. The network has promised over 300 hours of broadcasting, which includes additional programs beyond track races themselves. FOX will also televise Formula 2 and GP3 races.

F1 keeps the right to license live free-to-air coverage of "any races that take place within the region in the relevant market and delayed FTA highlights everywhere else in the region."

You can bet on Formula 1 racing if you live somewhere in Central or South America with legal betting regulations, but, until now, it was difficult to find events on TV. With the announcement of this new deal, F1 fans in Latin America should have no problem finding plenty of F1 programming.

Formula 1 Director of Media Rights Ian Holmes said, "We are happy to have FOX Sports as a partner in Latin America for the next five years. This new agreement represents a great opportunity and will allow us to bring the FIA Formula 1 World Championship in 19 countries throughout South and Central America where Formula 1 has a strongly established tradition as well as huge potential to gather and galvanize new fans." 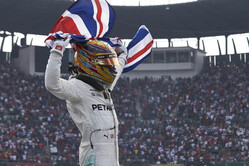 The President of FOX Networks Group Latin America, Carlos Martinez, issued a statement, saying, "We are happy to have such a relevant property as the FIA Formula 1 World Championship back (on FOX Sports in our robust motorsport content proposal. We're thankful to Formula 1 for trusting FOX Sports and our team to broadcast Formula 1 to more than 45 million Spanish-speaking homes in Latin America. The passion of Latin American fans for car racing makes this category key to our content offering, and we will contribute with our know-how to make the experience of living it in our portfolio unbeatable."

Last week, F1 came to agreement on a broadcasting deal with Movistar+ in Spain to broadcast all live races until 2020.