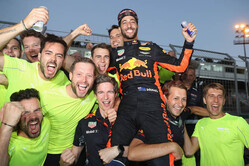 Revealing how he spent his winter break - what there was of it - which included a trip to New Zealand for Brendon Hartley's wedding, Daniel Ricciardo admits that the best part of returning 'down under' was the sunshine, the subsequent return to a wintery Europe bringing him back to reality with a bump.

Asked his highlight of last season, the Australian is in no doubt, "Baku, Baku and Baku," he replies.

"Obviously winning the race was a real standout for me," he continues. "Austria, I enjoyed that race a lot, that whole weekend went really well. To do it in Red Bull's home is something I'd been wanting to do for a while, so it was nice to execute a good weekend there.

"Can I say a non-racing highlight?" he laughs. "Because we did a lot of cool things away from the track as well, the American football we played in Austin was cool, I love Austin already, so that was a cool experience."

Asked to describe the RB14 in fourteen words, using his fingers to count he slowly replies: "It will absolutely not be unlucky for some but.. it.. will.. be.. the.. best.."

Reciting the regulation changes for 2018, when he gets to engine allocation he smiles. "We're down to three," he replies, "which will be interesting. I'll be gentle."

"I've got goal," he admits, "but I don't necessarily say 'by race three I want to have been on the podium twice'. I don't set goals like that. I guess the thing for me is that I want to be true to myself and make sure I've prepared as well as I can for every race and then I know I'll get the most out of it."

Asked if he believes Red Bull can beat Ferrari and Mercedes, there is little hesitation. "I believe so," he replies. "There are not many rule changes and we improved the car quite a lot last year. So I guess we should be able to carry that over this year and keep evolving.

"We should be able to fight more often," he adds, the broad grin having by now disappeared. "Time will tell."