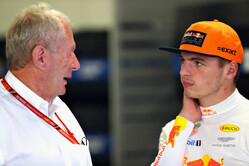 Had it not been for a stone thrown up by Emerson Fittipaldi's Lotus during the 1972 French Grand Prix, who knows what Helmut Marko might have achieved.

While his nine F1 outings for BRM in 1971 and 1972 tell us little, we know he was an incredibly quick driver, setting a distance record in the 1971 Le Mans 24 Hour race that still stands, the Austrian winning the race along with Dutch racer Gijs van Lennep in the mighty Martini Porsche 917.

A year later, in his pursuit of race leader Arturo Merzario his posted the second ever fastest lap on the infamous Targa Florio course in Sicily.

In the years following the 1972 French Grand Prix which left him blinded in his left eye, thereby ending his racing career, he went into driver management, forming his own race team which subsequently morphed into the Red Bull Junior Team, at which point he began overseeing the Red Bull Driver Programme which was to discover such talents as Sebastian Vettel and a certain Max Verstappen.

Talking to Dutch TV broadcaster Ziggo Sport, Max reveals that in addition to his own father, Jos, a veteran of over 100 Grands Prix with teams such as Tyrrell, Benetton, Arrows and Stewart, which eventually became Red Bull, he sees Marko as his second (racing) father.

"Helmut is a bit of a second (racing) father to me," he says. "He always wants the best for me.

"We talk a lot during a Grand Prix weekend, about what can we improve," he continues. "He keeps an eye on everything so he can advise me on the small things. Things like talking on the team radio or how to deal with people.

"He always wants the best for me, so he is always honest. If things go well, he's happy, but he will tell me if it's not good enough."

And then there's Max's 'first father', Jos, a man not afraid to share his opinion. The though his position as 'dad' is not under threat, Max admits his position as 'racing father' is not what it was.

"I wouldn't say we've grown apart now that I'm in F1," he insists. "Of course, I must do more my own thing. People expect me to be my own man, instead of my dad doing things for me. But I think it's important to have people like him to advise me and for them to have my back.

"Of course we had different opinions, but ultimately he was right, nine out of ten times," he admits. "So, I trust his opinion. We both have strong egos, but that is in our blood and has gotten us this far and into F1. If we didn't have that drive, we'd still be in go-karts."

"I trust him but that doesn't mean I don't make my own choices. A good example is Malaysia last year. We had some new parts on the car. They didn't really work for Daniel, but I was convinced they would be beneficial, despite set-up difficulties. I decided to keep using them. During the practice sessions, we just couldn't make it work but I was adamant we should use them in qualifying. Dad came up to me and told me he I shouldn't use the new parts. I stuck to my guns. In the end, we managed to make them work and I qualified in third, a really good result for the car at the time. Afterwards I walked up to dad and said ‘told you so'. Of course he laughed, he was happy with the choice!"