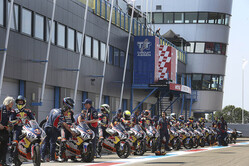 Inevitably, Formula One is looking to profit from the boost Max Verstappen has given the sport both at home in the Netherlands and away.

Last year, in the wake of the youngster unofficially breaking the lap record at Zandvoort in a 2012 car, officials at the coastal track which last hosted F1 in 1985, began a push to get the legendary track back on the schedule, a move to which the local town council gave its blessing as long ago as 2015.

Now organisers at Assen, which was first built in 1925 and is famed mostly for its two-wheeled racing most notably MotoGP, have received a boost in their bid to host a Formula One Grand Prix following a visit by the FIA's race director Charlie Whiting.

Following a computer simulation of the track in December which suggested the track already meets the FIA's Grade 1 safety requirements, Whiting's visit confirmed that only minor changes would be required to the circuit including additional kerbing, guardrails and barriers at certain points on the track.

"It's extremely good to hear that Charlie Whiting is very happy with the track, the modern facilities and the level of maintenance," said circuit boss Arjan Bos. "His positive judgement is an important step in the right direction to get Formula 1 back to the Netherlands, but we are not there yet. Far from it."

Indeed, last year, Sean Bratches admitted that while he would like to see the Netherlands back on the calendar, but favoured a (sigh) street circuit, with Amsterdam or Rotterdam the favourites.

According to Bos, the next step in the process will be for Formula One Management to visit the circuit.