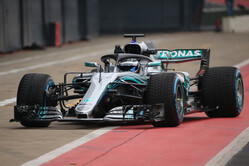 With only a little over a month to go until the first race of the 2018 season, Mercedes today took the wraps off the all new F1 W09 EQ Power+.

As the most advanced machine ever conceived by Mercedes-AMG Petronas Motorsport, the 2018 car aims to write its own chapter in that long racing heritage while at the same time pushing the technological boundaries of motorsport. The F1 W09 EQ Power+ is improved in every area over its predecessor and will become the fastest Mercedes F1 car in history.

The launch was part of the team's official 100 km filming day, during which the F1 W09 completed its first laps of Silverstone's International Circuit with Valtteri Bottas behind the wheel. Lewis Hamilton's run in the car is scheduled for the early afternoon.

"It is always a very exciting time because what has been designed is coming together and coming alive," said Toto Wolff. It's never going completely seamlessly or smoothly when you're trying to push the boundaries. We've had a good winter, I would say, no real drama. But it was a lot of hard work for everyone in the team."

Since Mercedes started working on the new car nearly 7,000 drawn parts have been created, over 40,000 components have been through non-destructive testing inspection. In total, 3,150 Saturday morning breakfasts have been served in the team's on-site restaurant...

"The winter is intense," continued Technical Director James Allison. "The planners have got thousands of lines of plans to deliver on, the design group have got to deliver several hundred new designs per day in order that they can be made. The test and development group and the team running the dynos have to stand ready as the pieces come in hot from the machines, to assemble them and put them on all the in-house testing kit. This allows us to be reasonably sure that everything is strong enough and has the right shape and will perform reliably."

While working on different areas of the car, the approach to developing and building the new car is the same in Brackley and Brixworth. Last year's championships don't impact the way the two factories prepare for the season. Every team member knows that the points reset to zero for 2018 – and that even greater challenges await in 2018.

"We are trying to stay humble and just keep doing the fundamental work we have always done," explained Andy Cowell, Managing Director of Mercedes-AMG High Performance Powertrains. "There is no secret formula to what we do. It is plain, honest engineering work. If there's an idea of how to reduce friction or improve combustion efficiency, we discuss it in our forum in a very forthright way. The sources of all ideas are human creativity, passion and enthusiasm."

"It's really amazing to know how many hours have been spent on designing and manufacturing the new car and how much effort people have put into it," said Valtteri Bottas. "As a driver you feel really special to be able to drive that machine."

"It's very humbling to see everything coming together," agreed teammate Lewis Hamilton. "People have worked so hard on this car, committed for such a long period of time. I'm just keen to get out there and take it to its limits. I'm one of only two people who get to drive it and there's this proud feeling because I know how much work has gone into getting the car ready."

The all-new F1 W09 EQ Power+ shares some of the DNA of its predecessor. Affectionately dubbed a "diva" for its occasional lack of predictability, the 2017 car was nevertheless the most successful car of the past season. The aerodynamic regulations remained largely stable for the 2018 season, with the introduction of the Halo and the ban of both monkey seat and high T-wings being the biggest changes. So the team chose to follow a similar design philosophy, aimed at developing the many strengths of the 2017 car and improving its weaker areas.

"We like some of the character traits from our diva," explained Wolff. "The W08 was the fastest car on the grid, scoring the highest number of pole positions and winning the most races last year. So we were careful not to lose the car's many strengths just to overcome the difficulties."

"Last year's car was never easy to work with, even at the tracks where we were strong," added Allison. "We could find our way through the weekend to a competitive outcome, but it was never easy. We hope that we have made some inroads into that and that this year's car will speak to us as engineers and to the drivers a little more clearly so that it is more obvious what to do to dial it in."

The new car stays true to the general design principles of its championship-winning predecessor, retaining the same wheelbase and running slightly increased rake. However, working with a well-understood set of regulations meant the team could push the design to greater extremes in every area.

"Across the board, this design is more elegant than last year," said Allison. "Last year's regulations were brand new and we weren't quite sure which direction they would take us in. So last year's car had a certain amount of wiggle room to adapt if we had found that we needed to move around certain aspects of the car. This year, being a little more confident of what we're aiming for, we've been able to commit more fully to certain concepts. So we have the packaging much tighter and have taken things to more of an extreme."

The new power unit M09 EQ Power+ has been developed to meet substantial changes in the Sporting Regulations for the 2018 season. The reduction in the number of power unit components that can be used per driver per season without incurring grid penalties meant that durability had to be extended to withstand the higher distances the hardware now has to run.

"The amount of change on the power unit for this year is quite considerable and driven by a number of requirements," explained Andy Cowell. "The biggest challenge we've got is lifting our durability limit with the challenge of racing just three engines per driver per championship and two ERS systems. That's a 40 per cent increase in the distance that the hardware needs to do for this year compared with last year. We focussed on trying to increase the life of the hardware without losing performance."

In addition to the changes coming from the new Sporting Regulations, the team at High Performance Powertrains sought to improve the power unit in other areas as well.

"We also wanted to change the packaging of the power unit for the benefit of overall car performance," Cowell continued. "We've been working very closely with our colleagues in Brackley, trying to understand the best overall integration in the chassis, the transmission and the aerodynamic surfaces. We've also been working on combustion efficiency and hardware friction reduction in partnership with Petronas."

Mercedes will race with the same driver line-up that won a total of 668 points last year, winning the Constructors' Championship by 146 points. The expectations for the new season are predictably high.

"Valtteri had a great start in 2017, having been drafted very last minute, with highlights in Sochi and Austria", said Toto Wolff. "After the summer, things became more difficult but he came back very strong. Valtteri has learned a lot, racing against the best Formula One driver of the current day and age."

"I want to use all the things that I learned last year," explained the Finn. "This year is all about executing and delivering the results. For me, consistency is the key. I had some really good races, but then I had races where I was not on the level I wanted to be. I want to be on a good level on every single race weekend – that's going to be the goal for me this year. I definitely want to fight for the championship."

Lewis Hamilton will start his sixth season with Mercedes-AMG Petronas Motorsport in 2018. His record with the team is impressive and includes four Constructors' and three Drivers' Championships as well as 41 race wins.

"Lewis is an incredible driver, the best of our time," said Wolff. "What he has achieved together with Mercedes-AMG Petronas Motorsport is remarkable. In addition to his performance on track, he has become an important figurehead of the team outside the race car as well."

"It's hard to believe that it's already our sixth year together," said Hamilton. "It feels like it's gone by so quick. I remember my first time coming to the factory in Brackley, doing my first seat fit and it's just strange to think that now we're here as far down the line. It has just been a dream experience – working with the greatest team and extending my relationship with Mercedes who I first signed with when I was 13. It's been an emotional rollercoaster together."

Hamilton believes his relationship with the team can get even better in the future: "Mercedes already is the best team and it continues to grow ever stronger. The foundation is very strong and now they're putting the right building bricks in place for the years ahead. I think the team is going to continue to grow and I hope that I can be a part of that for as long as I can."

The team also announced its reserve drivers for the 2018 season. Duties will be shared between 2017 GP3 champion George Russell, who will compete in FIA Formula Two this year, and Pascal Wehrlein, who will combine his reserve driver role with a return to the DTM, where he won the title in 2015.