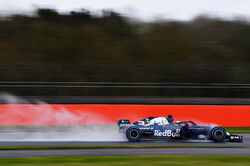 While it was the temporary livery that got the most attention yesterday as Red Bull not only took the wraps off its 2018 contender but sent Daniel Ricciardo out to play with it, it was the engine powering the car that held Helmut Marko's attention.

While nothing has been officially announced by either party, it is widely thought that Renault will no longer supply engines to Red Bull from the end of this season, leaving the Austrian outfit with severely limited options.

The successive title wins seem a lifetime ago, and while the hybrid formula introduced in 2014 has seen a deterioration in the relationship between Red Bull and Renault, even during the good times it was never the most stable of marriages. When things went well it was down to the car, when things went badly it was the engine at fault.

Though he is hoping that what might be their final season together ends the marriage on a high note, Helmut Marko fears that an improved Mercedes engine might spoil it all.

"The Renault engine should be more reliable and more powerful this year," he told Auto Motor und Sport, "and we will have a competitive chassis from the beginning... but Mercedes is building a new engine. It might be that their advantage will then be even bigger."

However, hoping that Renault - which, of course, is now supplying its own team - can live up to the claims it is making in terms of improvements, he added: "If the engine lives up to the promises that have been made, we should definitely be closer to Mercedes

"We saw that we always came up to speed in the second half of the season, and the analysis showed that we always finished the car too late. It doesn't make any sense if you find a couple of hundredths of a second in the last 14 days. It is more important to be well-prepared for the season."

The Austrian also played down the fact that rivals Mercedes and Ferrari are essentially one driver teams, while admitting that he doesn't believe either Max Verstappen or Daniel Ricciardo will be in a position to challenge for the drivers' title this year.

"If you only have one driver who is at the limit, then you never really know where you are. It is a disadvantage if your drivers take away points from each other, but I believe we are not in the situation to go for the title already this year."