Did Ricciardo have an off in the RB14? 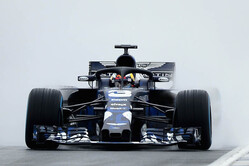 It is understood that the 'fresh out of the box' Red Bull RB14 incurrred damage at Silverstone yesterday during its maiden outing with Daniel Ricciardo at the wheel.

Although the Austrian team isn't saying anything, it is claimed that after going off in the wet at a soggy silverstlone the nose, front wing and floor sustained damage.

"Loosened everything up today in the new RB14 running the one off paint scheme," tweeted Ricciardo following his outing which was 'filming purposes'.

"The break was too long so enjoyed putting the helmet back on," he added.
Earlier this morning, along with a picture of the temorarily liveried car, the team tweeted: "Don't dip your toe in the water, make a splash!"

Shortly after which Auto Motor und Sport made the claim about the off and the resultant damage.

All that aside, at a time some teams appear almost embarrassed to unveil thewir 2018 contenders, such is the lack of fanfare, the temporary livery ensures that the publicity-canny Austrian team gets two bits of the cherry, a good dollop of news coverage following yesterday's initial launch and a further dose when the actual livery is revealed.

Clearly, some teams still have a lot to learn in terms of publicity... which might account for the pawcity of sponsor logos on some of the cars.