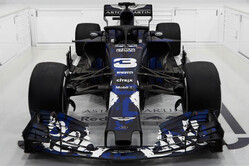 With little fanfare - seemingly the new norm on F1, certainly when it comes to car 'launches', Red Bull has this morning issued a number of pictures of its 2018 contender, the RB14, in a 'special edition' livery.

The Austrian outfit revealed that the car is actually on track today at Silverstone, in the hands of Daniel Ricciardo, as the team completes a shake-down, better known as a pre-season filming day.

"We've disrupted our usual systems and processes in order to launch our new challenger earlier than ever before," said the team in a brief statement accompanying the pictures. "That is reflected in the RB14 livery, a special edition."

This is not the first time Red Bull has initially run its car in a special pre-season livery, the team famously unveiling its 2015 car in a 'zebra livery' which was subsequently used in pre-season testing.