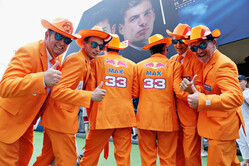 Having suffered bitter disappointment at a number of races where it was out in full, most notably Spain, Austria and Belgium, Max Verstappen's vast orange army of fans might soon have the opportunity to cheer its hero on home soil.

Filing the trademark is the first step in a process that will involve the Benelux Office for Intellectual Property as the possible interest of other parties will need to be investigated in terms of "Formula 1 Dutch Grand Prix".

The application, which was filed on 30 January, is for full rights to articles and services, which refers not only to the event but related merchandise.

While there has been talk of Zandvoort hosting a Grand Prix, the iconic track having hosted Holland's round of the world championship on 31 occasions between 1952 and 1985, last month FIA race director Charlie Whiting visited Assen, more noted for its 2-wheel racing.

Following a computer simulation of the track in December which suggested that it already meets the FIA's Grade 1 safety requirements, Whiting's visit confirmed that only minor changes would be required to the circuit including additional kerbing, guardrails and barriers at certain points on the track.

However, while Liberty is seeking a return to the Netherlands as part of its plan to extend the calendar to as many as 25 events, commercial boss Sean Bratches has admitted that a street event would be preferable with Amsterdam and Rotterdam the current favourites.

In May last year, cheered on by a typically fervent crowd Verstappen unofficially broke the lap record at Zandvoort while at the wheel of a 2012 Red Bull.

"I know from my Formula 3 days that Zandvoort is a great circuit," he told reporters. "There is way more grip now with the new tarmac. It is more comfortable to drive on, because there aren't that many bumps anymore, that's very positive."

Asked about the possible return of F1 to the track, he said: "If it was up to me, we'd have it here already.

"Of course that would be very nice but there is more to it like a budget and the infrastructure," he added. "A lot needs to be done in order to be able to organise this."

In November, a similar application was made in Denmark where a street race in Copenhagen is under serious consideration.

However, what all these prospective race hosts have to do next is show the colour of their money, and with the average annual race hosting fee coming to an eye-watering £22.3m ($31.1m) that is no mean feat."