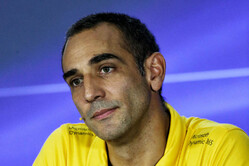 Renault boss Cyril Abiteboul has revealed that Red Bull has been given a May deadline by which time the Austrian team must decide on its engine supply for 2019.

Under the current regulations, engine manufacturers must inform the FIA who they will be supplying their power units to in the following year by the preceding May.

Increasingly unhappy with Renault, yet unable to secure a deal with Mercedes or Ferrari, the only other option is Honda, but understandably the Austrian team is unwilling to jump ship just yet.

However, if Renault doesn't hear anything by May it will pull the plug on Red Bull and under the current rules the Austrian team would have no choice but to use Honda's engines.

At the best of times the relationship between Renault and Red Bull has been fractious, and has deteriorated since the French company re-entered F1 as a constructor. There were ructions last year when (sister team) Toro Rosso virtually accused the French manufacturer of deliberately hampering its efforts as the Faenza outfit battled with Renault for sixth in the constructor standings, a string of engine-related issues for Hartley and Gasly allowing Renault to leapfrog the Italian team in the final round of the championship.

And as recently as this week, Red Bull boss Christian Horner has accused Renault of putting (engine) reliability ahead of performance.

"We are not going to hang around forever," said Abiteboul in Barcelona. "I know what Christian is referring to when he says that he has options. He's absolutely right. Like him I read contracts, and I know the obligation that we have towards the sport. But one thing that is clear is planning and there will be a deadline for Red Bull Racing to define what they want for the future. It's available, it's in the Sporting Regulations.

Referring to Horner's comment about reliability over performance, he laughed and said: "It's a no-brainer that this is what you have to put as a priority.

"The key message is that the fact of being reliable opens up more options in terms of performance," he continued. "The two go together. When you work on reliability, you actually work on performance also."