Testing: What a difference a year makes 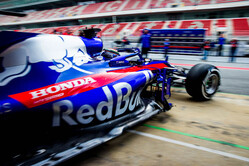 As readers wonder whether our story about a Hollywood composer being commissioned to write a new theme tune for F1 is an early April Fool, one might be tempted to think that it is the stats following the opening test are the big tease.

The team with the most miles under its belt is Toro Rosso, while between them McLaren duo Fernando Alonso and Stoffel Vandoorne have completed more laps than their colleagues at both Red Bull and Force India.

In 2017, Toro Rosso, then powered by Renault, came away from the opening test with just 183 laps completed, while Honda powered McLaren had completed 208 - this at a time the likes of Mercedes were completing 558.

A year later, and having switched engine suppliers, Toro Rosso tops the mileage chart with 324 laps, while McLaren has 260 under its belt.

Pierre Gasly is the driver with the most laps (229), while on 147, McLaren's Vandoorne has the fifth highest number.

In terms of pace, Fernando Alonso is the quickest of the four drivers, and while 1.596s off Lewis Hamilton's best, and on the supersofts, the Spaniard must be feeling a lot more confident than twelve months ago.

In addition to being the pace-setter, Mercedes is second in terms of mileage, the German outfit having completed 306. However, on 298 and 283 are Ferrari and Sauber, the Swiss team clearly benefitting from having the current power unit from Maranello.

It's early days, and what with the weather effectively costing two whole days of running, it's wrong to start making assumptions.

That said, there is no arguing with the fact that Honda has taken a massive step forward in terms of reliability, while McLaren is also benefitting from the switch to Renault.

On the other hand, should the trends continue, will the Woking outfit rue its divorce from the Japanese manufacturer, feeling it should have given the marriage a little more time.

Looking ahead to the second week, assuming the weather gods behave themselves, Red Bull, Force India and Haas appear to be the teams with most work to do.