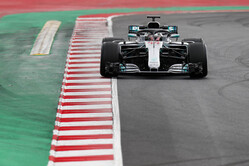 The last day of the first week of pre-season testing turned out to be the most productive day yet for Mercedes. The team managed to drive the W09 for a total of 600 kilometres, with both drivers running a decent amount of laps.

After tricky weather conditions had compromised yesterday's programme, the team got a lot of work done today and is now looking forward to more productive testing days next week.

Valtteri ran through some system check as the track dried in the morning, then moved onto dry tyres through a race stint to understand the cross-over. Lewis got started on a dry program to understand the car and the tyres, fitting in work for car systems around the program. Today's programme focussed on catching up on the shortage of dry running to date.

"We later did a cross-over, changing from Inters to slicks tyres in a pit stops. That was very useful for the strategy team, but also for us as the drivers, as you learn a lot when you try to find the grip on the slicks and feel how the car behaves.

"So it turned out to be quite a useful morning despite the wet conditions. I did 60 laps which is what we had targeted. It would have been nice to drive a little more in the dry, but I think we made the most out of these conditions.

"The first week of testing was a tricky start for all the teams, but I think we managed to make the most out of it. Everyone in Brackley and Brixworth has done an amazing job, everything on the car worked so well since day one and the engine is running very smoothly as well. I'm looking forward to next week, hopefully we will come back to normal Barcelona conditions. I'm excited to keep learning about the W09 and maybe next week we will find out how quick it really is.

"Today has been positive," added Lewis Hamilton, "I'm so happy that I could get in the car and I'm really excited that I could get some running in. It's been the first time today that I've really been out to learn a lot more about the car and its characteristics. I got to see what she's like and stretch her legs a little bit. Driving a new car is like trying to crack a new code: you have to figure out which different techniques you need to get the most out of it. But the W09 feels like last year's big sister.

"Out on track, the Pirelli tyres have been very hard to get working in these unusually cold conditions but they feel pretty good once they are up to temperature. Of course we've got things to learn and things to improve on balance-wise but overall my feeling is positive. I'm really looking forward to next week and to getting back in and learning more.

Track conditions started very wet from heavy rain overnight, which made early-morning running tricky and meant a slower-than-usual start to the programme. As the track dried out Stoffel Vandoorne was able to quickly and efficiently run through a comprehensive test plan, which included key correlation, component and aero tests that necessitated all-important mileage.

As the track was kept green throughout the traditional lunch break, Stoffel continued consistent running into the mid-afternoon, when the team handed the reins over to Fernando at around 16:00hrs, giving him the opportunity to make up for some of the lost track time yesterday due to bad weather.

Stoffel completed a solid 110 laps and posted the second-fastest time of the day, while Fernando did 51 and finished fifth on the timesheets, bringing McLaren's total for the final day of test one to 161 laps.

"Today was a very productive session for me," said the Belgian. "The day started off a little bit slowly with the bad weather conditions and it took a long time for the track to dry up, but even with that to deal with we still completed a lot of mileage and got a good understanding of the car.

"It feels good to get a good amount of laps on the board after we missed out a bit over the past few days. When the track started to dry I did some very good running and completed a lot of set-up changes, trying to understand our package and how everything works together, and the feeling was positive.

"I finished today with 110 laps and it's been a long time since we've been able to do this. We had time to put Fernando in the car too for the final part of the session, so altogether a very productive day."

"I'm very happy with what has been an impressive day from the whole team in the garage and at the factory to put that amount of laps on the board between Stoffel and myself," added Alonso. "The car ran perfectly all day. We did some interesting runs with some set-up changes, and we keep discovering more about the new package each time, especially with the integration of the Renault engine that was previously unknown for us.

"It was a very productive day for all of us and I'd like to say well done to everyone for working hard to get through a very full and comprehensive test programme today."

"Today we've run reliably all day," said Eric Boullier, "which is a very positive way to end the first week of testing. We had some small glitches in the first two days which caused us to lose a disproportionate amount of track time, and the weather didn't help any of us yesterday, but today everything fell into place.

"I'm happy we've finally been able to run a full test programme today and follow our plan, which has given us some solid data and feedback from the factory. Being ‘winter world champions' on the timesheets is not of interest to us - the important things are mileage and learning - and today we're very satisfied with what we have managed to achieve.

"Recovering mileage was our top priority in order to get back on schedule, and now we can regroup and use the data we've gathered to redefine our test programme for next week. Now we have the initial test programme done and under our belt, the objectives for test two are running a race distance and practising pit stops - we're giving the latter more focus and new equipment this year, so that will be the key."

The 120 laps Sebastian Vettel drove today, brings the total completed by the SF71H over what was effectively just a three day session to 298.

After yesterday's snowfall, temperatures were very definitely on the up today at the Catalunya Circuit: at the end of the session, there had been a high of 12.7 degrees air and almost 15 on track, but damp conditions in the morning still affected the work. It explains why, during the first few hours, Seb used wet weather Intermediate tyres, before switching to new and used Softs for the rest of the day.

The final part of the session was given over to long runs, which yielded a best lap during these tests of 1:20.241.

"The afternoon wasn't exactly ideal," said the German, "because of the track conditions and also a bit of time lost in the garage to sort out a few details. I'd have liked to have driven more, but we can do that next week, when we will start to get a clearer picture."

At Haas, Kevin Magnussen was back at the wheel, looking to improve upon the 36 laps he logged on Tuesday. He wasted no time getting onto the track when it opened, making three reconnaissance laps on full wets. He transitioned to intermediates at approximately 11:30 a.m., with two eight-lap runs.

Haas worked through lunch and shortly after 1 p.m., the track was dry enough for slicks. Magnussen donned a used set of soft tires just before 1:30 p.m. and tip-toed around the track, as it remained slippery. A more involved, six-lap run that began shortly after 1:40 p.m. yielded a quick time of 1:24.286 on his 30th lap.

A three-lap stint on Yellow softs followed by a 10-lap drive on supersofts ended the day.

"It was a very good day," said Magnussen. "We got a lot of laps and, finally, the weather decided to behave. It was nice to feel the car and get the first touch of the car's balance and performance. I'm looking forward to continuing the work next week. We're happy with what we're seeing and we have something to work with."

"A solid day," added Guenther Steiner. "I think it's a good end to a difficult testing session. The first few days were compromised by the weather, but today we got 96 laps in. We made some progress and we understand the car a little bit better. Next week we need to start from where we are now, get better, and then work toward being ready for Australia."