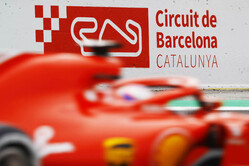 Despite the negativity following the teams' inability to agree on starting this week's Barcelona test a day early following the bad weather that compromised last week's running, today was mostly wet as the Circuit de Barcelona was used for filming purposes.

Testing gets underway tomorrow (Tuesday), and while there will be no repeat of the snow which caused issues last Wednesday, early forecasts suggest some rain on Thursday.

That said the other days should be bright and sunny with temperatures hitting as high as 19 degrees by Friday.

All the teams have released their driver schedule for the test, bar Mercedes which has only revealed its line-up for Tuesday.

Once again, a couple of teams have followed the German outfit's strategy of running one driver in the morning and the other in the afternoon, with Williams the only team seeking to run three drivers over the course of the four days as Robert Kubica gets two mornings in the FW41.