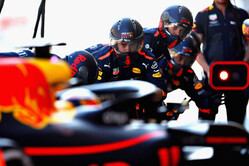 Never mind the fact that Lewis Hamilton, 0.353s adrift of the Australian, Valtteri Bottas (0.513) and Sebastian Vettel (1.494), were on harder rubber, the fact is that the Australian not only blitzed last year's best time - as did the Mercedes duo - he completed an astonishing 165 laps.

Though his best time was set on the hypersofts, while the Mercs were on supersofts and Vettel has yet to even look at the softer compounds, Ricciardo must be feeling pretty chipper as he looks ahead to his home race and the decision on his post-2018 future that lies beyond that.

Though Red Bull has had its issues over the course of the test, for the most part these have tended to affect Max Verstappen rather than his teammate. Even then, compared to the likes of McLaren and others the issues have been minimal.

That said, the Mercedes has barely missed a beat, the car lapping with almost tedious monotony, as Hamilton and Bottas completed another 175 laps between them.

With Kimi Raikkonen 'phoning in sick', it was down to Sebastian Vettel to continue where he left off yesterday, the German heading off after the lunchbreak having put the Ferrari third on the timesheets.

Whether Raikkonen was actually fit enough to return to work isn't known, but the Finn certainly had a quiet afternoon, completing 49 laps on his way to posting the ninth best time of the day, albeit 2.195s off the pace.

At Toro Rosso, Brendon Hartley was one of a number of drivers to complete a race simulation this afternoon, one of the reasons why few drivers improved their times following the lunch break. And while 1.776s off the pace, 119 laps for a Honda powered car seemed unthinkable not that long ago.

Talking of which, it was another 'problematic' day for McLaren. We say 'problematic' because we refuse to go down the sensationalist route of some media outlets - including many who should know better.

Fact is, After 47 laps this morning Fernando Alonso stopped on track as a result of an oil leak. The team subsequently opted to change his engine and as a result the Spaniard didn't reappear until ten minutes before the end of the session having missed over six hours of running.

Eric Boullier insists that it's "only testing" and that there is nothing to worry about. Not wanting to go down the doom and gloom route we'll leave it at that, however it is the variety of the issues that really worries, be it wheelnuts, overheating or electrics, thus far the MCL33 has appeared prone to all number of issues. Furthermore, questions over the packaging of the power unit recall basic issues such as Honda’s oil tank saga from last year.

Of course, sensational headlines will do nothing for team morale, however, over the next two days the Woking outfit needs as much running as possible.

It was another anonymous days for Renault, which had Sainz on duty this morning and Hulkenberg after lunch...

Talking of which, it was the teams that requested doing away with lunch breaks in order that they could get in as much running as possible, even though the various track tours carried out during the break are the source of much needed revenue for the circuit. Lo and behold, the lunch break is scrapped whereupon the teams head off for lunch anyway and there's no running… and no track tours.

Anyway, back to Renault. Between them Sainz and Hulkenberg completed 190 laps with no signs of an issue and, like Vettel, posted their best times on the soft rubber without feeling the need to go softer. Clearly, some teams have a little something up their sleeves.

An oil leak cost Haas also, Romain Grosjean missing most of this afternoon's running as the team fixed the issue. By close of play, having completed 78 laps, the Frenchman was 8th on the timesheets.

While "it's only testing' appears to be McLaren's motto, it seems to have spread to Williams. Indeed, there are times when it feels that the Grove outfit hasn't actually turned up. Yes, they're posting times. Yes, they're completing the laps, but could they be more anonymous? Furthermore, whatever strategy the team is employing, Sirotkin really needs to start appearing a little higher up the timesheets before the media starts asking questions.

One could say the same about Force India, for while Esteban Ocon completed 130 laps, he finished the day 2.758s off the pace. That said, like Ferrari we've yet to see the Pink Panthers on the softer rubber, so perhaps we're jumping to the wrong conclusions. It wouldn't be the first time.

Though 2.871s off the pace, Charles Leclerc completed a mighty 160 laps, even if he brought the session to a premature end by getting stuck in the gravel at T12. Again, there is the gut feeling that we’re not being given the full picture yet.

Gradually things are building, and today we clearly saw Mercedes and Red Bull begin to ramp things up. Over the next couple of days we could be in for some blistering times however, as the adage goes, 'to finish first, first you've got to finish', and with no prizes - only a psychological victory of sorts - for dominating pre-season testing, some teams may not only be keeping their powder dry for Friday but beyond.

That said, one cannot help but feel that Ferrari is about to unleash something special.