Ferrari throws down the gauntlet 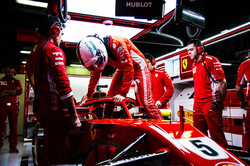 No sooner had Niki Lauda suggested that Red Bull looked likely to be Mercedes strongest opposition this year, than the team with which he won two of his titles gave him a stark reminder of what it is (still) capable of.

Following yesterday's ramping up of the pace from Red Bull and Mercedes, this morning Sebastian Vettel finally bolted on the ultrasofts and then the hypersofts to serve notice that the prancing horse is up for the fight.

The early pace-setter was Stoffel Vandoorne in the McLaren, the Belgian constantly improving until he was the fourth fastest of the entire test - a position that for much of the morning nobody appeared likely to improve on.

Though it is unclear whether the McLaren subsequently encountered a problem, the MCL33 was stuck in its garage for two hours, finally appearing just before the lunchbreak.

Along with pace, consistency and reliability, a number of teams have been trying new and updated components, Renault a new front wing while, among other things, Red Bull tried new bargeboards. Indeed, the back to back running of new parts will account for Max Verstappen's lowly place on the timesheet.

The centre of attention however was Vettel who slowly, almost tantalisingly, moved from one soft compound to the next, gradually improving his time. Having taken the coveted fourth overall spot he then improved to second, finally leaving the rest for dead when he banged in a 17.913.

Not done, he subsequently improved then pitted and returned for a further assault, finally ending the morning on a 17.182.

Admittedly he was on low fuel and these were quali runs, but the German - who would follow a hot lap with a cool down - posted his best times at the end of each stint. Furthermore, having completed 84 laps over the course of the morning, reliability doesn't appear to be an issue.

Almost stealing the headlines at the lunch break was Pierre Gasly who from out of nowhere produced a 17.805, however the time was subsequently deleted as he'd cut the chicane. Nonetheless, the Toro Rosso driver ends the morning fourth overall.

Magnussen and Hulkenberg were also at the top end of the timesheets, the Dane, like sixth placed Ericsson posting his best time on a qualifying run. That said, the fact he was on supersofts shows there is room for much improvement, good news following the somewhat lacklustre pace shown on previous days.

At Mercedes, Valtteri Bottas clearly wasn't looking to set the timesheets alight, the Finn putting another 97 laps on the W09 on his way to the seventh best time of the morning, much of his session spent on long runs.

Robert Kubica was another driver who gradually improved, ending the morning eighth having completed 73 laps. While his is the best time achieved by a Williams driver thus far in testing it's only fair to point out that his best was on supersofts while Stroll and Sirotkin have yet to try the yellow-banded rubber.

Another quiet morning for Force India, which had Sergio Perez on duty, the VJM11 completing 71 laps on its way to posting a best time 2.452s off the pace.

With temperatures set to rise this afternoon, it remains to be seen whether Lewis Hamilton and Verstappen will rise to Vettel's bait or whether race sims will be the order of the day.