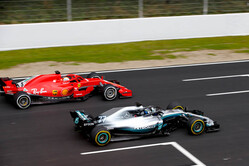 Though it's been said many times before, the old adage about the fact that 'to finish first, first you have to finish' is totally true.

It's no use having the fastest car on the grid if it isn't going to make it to the finish line.

This year, as in 2017, Ferrari fills the top spots in terms of pace, though while Kimi Raikkonen was the pace-setter last year, this time around it's teammate Sebastian Vettel.

Third quickest is Fernando Alonso, but then again, when one comes to reliability McLaren is at the bottom of the pile. OK, it's nowhere as bad as last year but it's not the best way to inspire confidence.

Of course, this year we lost almost two days courtesy of the weather gods, yet even so Mercedes only completed 56 less laps than in 2017, while, admittedly, McLaren completed 174 more.

And then there's Honda, the Japanese manufacturer completing 425 laps last year when powering the Woking team, but a mighty 822 this time around in the Toro Rosso.

Despite looking poor on pace, Williams is looking good on reliability, while Renault has also taken a significant step forward. Indeed if we compare this year's pre-season test mileage to 2017, Toro Rosso McLaren and Renault see the biggest improvements, while Force India has taken a step back.

Though Haas has completed less miles this year than it did in 2017, the pace of the VF-18, especially considering it didn't resort to the hypersofts, indicates the American team could be a surprise force in the midfield.

As for engines, a direct comparison is made difficult by the fact that last year only two teams were running the current-spec Ferrari power unit, however, overall Renault has completed 16.7% more laps this year and Honda a mighty 93%.

If nothing else, it’s food for thought.