Kubica chose to give final session over to Stroll 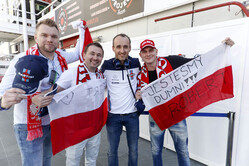 When Williams announced ahead of this morning's running that's its plans had changed and that Lance Stroll would be replacing Robert Kubica few were surprised.

As pre-season testing comes to an end, the Pole is the quickest of the team's drivers, despite setting his best on supersofts, a time Stroll was unable to match on ultras.

As the conspiracy theories mounted, Claire Williams was keen to make clear that it was the Pole's own decision to hand over his last morning of running to the Canadian.

"It was actually under Robert's instigation," she said. "Over the course of the seven days that we had here, the race drivers through various different reasons, whether it be weather or directions that we've taken, haven't had the track time that we wanted them to ahead of Australia.

"As everyone knows, Robert is an incredibly considerate racing driver," she continued, "and we're very lucky in that and he knows that for the team's benefit, the race drivers need the maximum amount of mileage. So it was his generous offer yesterday.

"It wasn't the team," she insisted. "We haven't asked him. It wasn't Lance, Lance didn't ask him. It was Robert, it was off his own bat, and clearly we were going to accept that we need that our race drivers to be in a best possible position that they can be going to Australia. And having them both in the car today will help us."