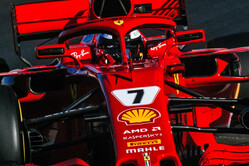 As was the case yesterday, the final day of pre-season testing was a day of two halves, albeit for different reasons.

Much like yesterday, the best time of the day came in the morning as drivers looked to spend the afternoon on race simulations, taking advantage of the fact that conditions would be slightly more comparable to those expected come Grand Prix time.

However, unlike yesterday, there was a late burst of activity which saw the timesheets like up like a pinball, as Kimi Raikkonen's benchmark came under serious attack.

By one of those strange quirks of F1 fate, the two drivers most likely to claim the Iceman's top spot were Fernando Alonso and Carlos Sainz, who had gone into the (non-existent) lunch break with just 11 laps between them and not even a sniff of a lap time.

Indeed, in the dying moments of the session, Alonso looked to have well and truly pulled the rabbit out of the hat when he crossed the line at 16.720 - according to some sections of the media the fastest lap in the history of the world - only to have it deleted for cutting the final chicane.

Nonetheless having spent almost five hours kicking his heels as his crew changed his engine following a turbocharger issue, second and 0.563s off the pace is surely a lot more than the two time world champion was expecting a few hours earlier.

Likewise Sainz, who was also sidelined for several hours, albeit with a gearbox problem.

Though McLaren has had a roller-coaster pre-season, today's pace, and yesterday's reliability will fill the Woking squad with a certain amount of confidence as it heads to Melbourne, certainly compared to the situation twelve months ago.

That said, Toro Rosso, though further down the timesheets, saw Brendon Hartley add another 156 laps to the STR13's tally, as the Faenza outfit, and new engine partner, confirmed the pace and reliability shown throughout testing.

As was the case last year, Ferrari leaves Barcelona having set the two fastest times, and while the Maranello outfit went on to win the opening race of the year and led the championships until the summer break, many feel that it is Red Bull that is closest to Mercedes, with some even suggesting that Ferrari has lost ground.

Fact is, it's testing, and it is not until Saturday in Melbourne, and again next day, that all will become clear.

While Lewis Hamilton opted to 'get the laps in' this morning, this afternoon Valtteri Bottas clearly wanted to join in the fun while his rivals were lighting up the screens. While his best (18.825) was 1.604s off the pace, he did it on mediums while all around him were either on hypers, ultras or some other form of soft.

Indeed, as reported earlier, feeling there is no point in running them at this track - as opposed to supreme confidence - like Williams, Mercedes hadn't even brought any hypersofts to Spain.

As for Red Bull, it was easy to forget Daniel Ricciardo was on duty today, such was his low profile. Then, with just under two hours remaining, he banged in an 18.715 on his supersofts to go third, as if to remind us he was still there.

Leading the way in terms of mileage, and at one time threatening Raikkonen for pace, was Romain Grosjean, as Haas continues to look to be one of the big improvements this season. Furthermore, while one of his best times was set on supersofts, like Magnussen yesterday, the Frenchman's best came at the end of a long-ish run.

Having made his (indeed Sauber's) traditional daily trip to the gravel trap, Charles Leclerc finally found his mojo and finished the day ninth on the timesheets and looking - at this stage at least - as though the Swiss team could be a force in the midfield this season.

While Renault was forced to abandon its plans to run both drivers today, Williams like Mercedes, had two on duty. OK, they weren't the two we expected because Robert 'Mr Nice Guy' gave up his day in order to give Lance Stroll more time in the car. However, in the great scheme of things, it was actually Sergey Sirotkin who got the lion's share of the day in the FW41, his teammate not getting a go until just over two hours before the end.

While Sirotkin finished tenth overall, Stroll could only manage 12th (of 12), his best time 2.733 off the pace. Ordinarily one wouldn't take too much notice, but the fact is that on six of the eight days of testing a Williams has taken the final place on the timesheet.

Over the coming days you're going to see more numbers crunched and have more data and theories thrown at you than you'll be able to shake a stick at, and while we went into the 2017 season fearing another year of Mercedes domination for much of the year the silver cars were chasing Mr Vettel, and it wasn't until reliability went south and the German's reputation for being cool under pressure went MIA a couple of times that the Silver Arrows were able to take control.

Hopefully, Ferrari and Mr Vettel have learned their lesson, and in Melbourne, and beyond, we will have a fight on our hands once again.

Furthermore, let's hope Red Bull can stop the whingeing and focus on what they've got, and that the Austrian outfit - and its engine supplier - can provide its two race-winners with the machinery to take the fight to its rivals.

As for the midfield, the possibilities are endless, for while Force India looks as though it could be toppled from its 'best of the rest' position, will it be Renault, McLaren, Toro Rosso or even Haas that unseats it.

Sauber clearly has much work to do in the months ahead, while one cannot help but feel that Williams is walking backwards towards a very slippery slope.

Whatever happened here over the last eight days, it's Melbourne where the BS stops, and even then much can change over the months that follow, just ask Ferrari and Mr Vettel.