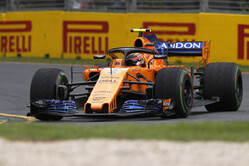 As feared yesterday, the Formula 1 community arrived at Albert Park to torrential rain and thunderstorms on Saturday morning. By the start of FP3, the rain had subsided, but left a very damp track and track temperatures peaking at around 27 degrees Celsius, almost 20 degrees lower than yesterday.

Despite this, the track conditions evolved quickly as the asphalt began to dry. The team went about its scheduled programme as planned, and took the opportunity to gather useful information on tyre compounds and track conditions that could prove useful in the event that tomorrow should bring similar weather. The session went smoothly for both drivers - Stoffel setting the ninth fastest time and Fernando just behind him in 10th.

The rain held off for the first qualifying session of the year, and both drivers put in strong performances to ease fairly comfortably into Q2. The second session proved more of a challenge, and, on a rapidly cooling track, they encountered traffic. Fernando and Stoffel finished the session in 11th and 12th respectively, but both reported that they weren't able to get the most from the car this afternoon.

Fernando Alonso: "After winter testing, you never know how the performance in the first qualifying will be, so it's some kind of relief that the car is performing well and we're more competitive than the last few seasons. This year we'll have fun.

"There's a lot of potential to unlock in our car, and we haven't yet been able to do this due to some little issues. I think McLaren will be quite strong in the coming races, which is a very positive start.

"Apart from Toro Rosso, we're the only top team that has gone through an integration process of a new power unit with the chassis, the systems and the set-up, so there will be performance that will come for free once we've adapted more to the Renault power unit.

"I think our race pace is probably better than our qualifying pace, so we're in a good starting position - P11 or even P10 due to [Valtteri] Bottas' problem - so definitely some good points are the target. Tomorrow will be probably one of the first races in the last couple of years where we won't need to defend, and we will go for the attack mode. Also, the weather is still a factor for tomorrow, and if we have some showers it'll be a great show. I'm very positive and very optimistic about this season."

Stoffel Vandoorne: "We're a bit disappointed not to be in Q3 with both cars. It's a shame as we showed some good promise yesterday in the dry during practice. From our side, there is some work to do - the other midfield teams are close and have improved a bit since yesterday, it seems - so we need to see where we lost out.

"There was definitely potential there for us to make a good step forward today, and we've missed out on that. We have a good benchmark though and this is still very early in the partnership between McLaren and Renault, so there are still a lot of things that have to develop. We know that through the season we'll improve a lot as a team and as a package, and I hope that we can show that very soon.

"Tomorrow is race day and there are a lot of things that can happen. Overtaking is difficult here, and as it's the first race of the season there's usually a lot of drama. Compared to last year we've definitely made an improvement, and our race pace looks quite promising, so we need to be sharp and ready for anything. The weather might play into it a bit too, so if we can have a clean race and stay out of trouble, hopefully there are some points on the cards."

Eric Boullier: "Today was a bit of a mixed bag for us. We had a solid P3 session where both drivers coped admirably in the ever-changing conditions and continued to give us valuable feedback as the track evolved.

"Come qualifying, the track was drying out further although clouds were once again forming, making track conditions difficult to read. Fernando and Stoffel put in strong performances to ensure our comfortable progression through Q1. Q2 was already proof of what we expected from winter testing - just how close the midfield pack is in 2018 - and we knew it would be a challenge. Both drivers were affected by traffic on a busy track, but also weren't able to get the most out of the car today. We know from our analysis that there is more performance to be unlocked, and there was potential to be higher up on the starting grid tomorrow.

"On one hand, we know there's more to come from our package that we couldn't maximise today, and in some ways we were hoping for more. However, on the other hand, we're encouraged by how far we've already come over the winter period. Now, the important thing is that we extract everything we have in tomorrow's race, where our pace over long runs is what matters most. If conditions are dry, we have the benefit of free tyre choice, and we'll use that to our advantage as much as possible on Sunday afternoon."