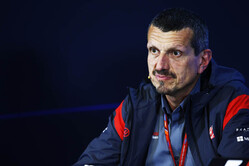 Team boss Guenther Steiner has reacted to accusations that his team is benefitting from extra, illegal, input from Ferrari.

While Haas puts much of its step forward this year down to its better understanding of the tyres, rivals claim that the American outfit is benefitting from additional illegal input from engine supplier Ferrari.

While the American team uses the Maranello outfit's engine, gearbox and front suspension, and has had access to the team's windtunnel, rivals claim that additional information is being shared thereby flouting the rules which ban teams receiving data, drawings or information on listed parts directly or via a third party.

Leading the complaints that the 2018 Haas is essentially the 2017 Ferrari are McLaren and Force India, who, ironically, enjoyed a close relationship in the latter's formative years when the Woking outfit provided various components for its Silverstone-based rival.

Looking ahead to next weekend's Bahrain Grand Prix, Steiner took the opportunity to hit out at the accusations.

"Everybody is allowed to have an opinion. Some people have an opinion, which I think is based on no facts," he said. "I think the whole of Haas can be proud of the work done between last year and over the winter to produce the VF-18 and get it into its competitive condition.

"It's merit to them," he continued. "They can be proud. If people have an issue, fine with me. We report what we are doing, like everybody else, to the FIA. That's why I'm more than confident we are not doing anything wrong.

"I'm perfectly fine with how we do business," he insisted. "We design our own aero, as per the regulations, and yes, we use mechanical parts from Ferrari, but everybody's known that for the past two years. We are well above board, and happy to be where we are."