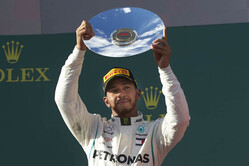 We're not aware of the exact arrangements between Sky Sports and its newest team member - 2016 world champion Nico Rosberg - but are we alone in feeling that for much of the Melbourne weekend he was 'missing in action'.

One minute he'd be standing there, sharing his thoughts along with the ever-increasing team of pundits then suddenly he was gone.

Never was this more obvious than on Sunday as Martin Brundle began his popular grid walk. The Briton turned to ask Rosberg a question and the German had suddenly gone walkabout once again. Indeed, we were minded of the friend you take to a party who then proceeds to spend the rest of the evening avoiding you, clearly embarrassed to be seen in your company.

Sadly Rosberg's frequent disappearances robbed us of what might have been TV gold, that moment just after the race when, revelling in schadenfreude, he attempted to supress s a broad grin as he stuck his microphone in Hamilton's face and asked: "So Lewis, what happened?"

Another German who had good reason to enjoy Lewis Hamilton's ill fortune on Sunday was race-winner Sebastian Vettel.

As the German insisted that the Briton had been privy to an extra mode - something subsequently confirmed by team boss Toto Wolff - and wondered why the world champion hadn't used it before, Hamilton replied: "I was waiting to put a good lap in. Wipe the smile off your face!"

It was unnecessary and did the Briton no favours.

24-hours later and the situation is reversed, however, rather than go the full Lilly Allen (Smile - think about it) not only did Vettel refuse to rise to the bait, when asked if he had now wiped the smile from Hamilton's face, he played down the Mercedes driver's comment.

"He said he was joking and I believe him," said the German. "I think we are old enough, I don't think we need to go on that sort of level.

"It's fine as long as we joke with each other and I don't think... apart from a point last year, we don't have a problem with each other," he continued. "I think even if we are very different persons, I think we share - all of us - a common passion and that makes us quite equal again. We love racing and we try to do our best, once we're in the car and beat all the others. I think in that regard, I don't see why we shouldn't get on with each other."

At that point in time, in that fleeting moment when the world champion could have graciously agreed, when asked if he saw it the same way as the German, Hamilton merely replied: "Sorry, I wasn't listening."

Again, it was unnecessary and did the Briton no favours… though the British media will welcome it as the perfect foundation for the season ahead.