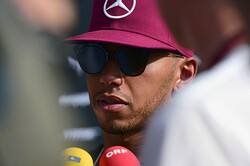 While a so-called 'party mode' on the Mercedes engine helped Lewis Hamilton to a stunning pole in yesterday's qualifying session, the Briton and his team were left feeling somewhat flat following today's Australian Grand Prix after a software glitch cost the world champion almost certain victory.

The Briton was comfortably leading the race and had just pitted in reaction to Kimi Raikkonen's stop when Romain Grosjean became the second Haas driver in as many laps to suffer a loose wheel following his sole pit stop.

The Frenchman parked the car by the side of the track necessitating the deployment of the Virtual Safety Car (VSC) at which point Sebastian Vettel and a number of other drivers promptly pitted.

Ahead of his stop, though leading, Vettel normally would have emerged behind Hamilton or even Raikkonen. However, under the VSC rules, which limit the speed of the cars on the track, the speed limit is higher in the pitlane which means that, combined with the fact the pitlane follows a shorter route than the track, allowed Vettel to maintain his lead, the German seemingly as surprised as anyone to find himself still ahead of the Mercedes driver, though Ricciardo and Alonso, who also pitted under the VSC, similarly gained advantages.

"What's up guys," asked an incredulous Hamilton. "Was it my mistake, was I meant to be going quick?"

"Lewis, we thought we were safe but there's obviously something wrong," Hamilton was told in a follow-up communication.

"I think we have a software issue with the VSC delta," team boss Toto Wolff told Sky Sports after the race. "We always had the green light that the gap is enough for us to stay ahead. And then we saw the TV pictures and it wasn't enough.

Asked how he felt to suddenly realise that Vettel had taken the lead, the Briton admitted: "I think, just disbelief from that moment until... just disbelief."