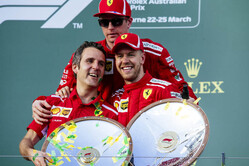 While Lewis Hamilton's pole-winning lap might have left Daniel Ricciardo as though he had received a pie in the face, and Mercedes rivals with egg on theirs, that frightening 0.6s gap might well be overhauled today.

Though it appears the weather gods have chosen not to interfere in the season opener - another new move from Liberty? - we know from experience that Saturday and Sunday afternoons can witness a massive turnaround in fortune.

Certainly, Hamilton heads into the race (and season) as hot favourite, but for a start off he will not have teammate Bottas riding shotgun at the start.

Behind him come the two Ferraris, and while Kimi - who has been quicker than Vettel in most sessions - is giving little away, Sebastian is keen to make up for not only last season but no doubt Hamilton's dig at him during yesterday's press conference.

Though - especially with the ludicrously named 'party mode' - we know the W09 is blindingly quick, there remains doubt over its race pace and also its sensitivity in terms of tyres. On the other hand the Ferrari looks good when it comes to race pace.

Red Bull was always aware that it would struggle on what is an engine circuit, and no doubt the card up the Austrian outfit's sleeve is its decision to start the race on supersofts, the only team in the top ten to do so.

Ricciardo has that grid penalty however, fired up in front of his home crowd, the king of the late-brakers is sure to be mixing it up front within a few laps.

And then comes the real fun, the midfield, where Haas heads Renault, Bottas starting from 15th after requiring a new gearbox - McLaren, Force India, Williams, Toro Rosso and Sauber.

On the evidence thus far, Toro Rosso and Sauber are going to struggle, while Williams does little to convince. Even so, the exploits of an ever-frustrated Alonso, when up against the likes of a feisty Haas duo and the ever warring Panthers, makes for the sort of entertainment one needs on a Sunday afternoon.

And talking of entertainment. In case you didn't see the announcement about the Netflix F12 "docu-series", the sport's commercial boss, Sean Bratches, had this to say.

"Formula 1 is a global sport that we are actively repositioning from a motorsport company to a media and entertainment brand," said the American. Oh really.

Despite all the promises, including "brand new software", it very much looks as though Pirelli's predictions of a multi-stopper will be proved wrong, with most of the leading drivers once again opting for a single pit stop. Rather than logos and theme tunes, perhaps this is the area the sport - or rather entertainment brand - should have been looking at.

As if that wasn't bad enough, it is also thought a number of teams, particularly the non-Mercedes runners, will need to conserve their fuel. Plus ca change.

While we remain unconvinced that the addition of a third DRS will have the (official) desired effect, the exploits of both Ricciardo and Bottas should produce some magic, especially with the Australian (and his teammate) on a different tyre strategy.

The pitlane opens and one by one the cars head out. Air temperature is currently 24 degrees C, while the track temperature is 38 degrees. It is bright and sunny but quite windy.

The field heads off on the warm-up lap, as Hamilton is warned of a headwind in T1. All on ultras bar the Bulls, Stroll, Ericsson, Hartley, Sirotkin and Leclerc who are on supers.

As Vettel looks to hold off the pack, Raikkonen is all over Hamilton, but the Briton appears to have the situation in hand. Further back Ricciardo has already made up a place, making short work of Sainz.

At the end of lap 1, it's Hamilton, Raikkonen, Vettel, Magnussen, Verstappen, Grosjean, Hulkenberg, Ricciardo, Sainz and Alonso. Hartley pits at the end of the first lap and switches to softs having flat-spotted his tyres in the first corner in a massive lock-up.

"Come on mate, straight in," Verstappen is told, "we aint got time for this."

"Mode seven and overtake, if you need it," Verstappen is urged, the Red Bull driver clearly frustrated behind the Haas.

As Hulkenberg complains of traffic, Perez is warned about the temperature of his rear-left.

Sirotkin has stopped at T13 on lap 7, thus bringing out the yellow. The Russian complains of a brake issue.

Ericsson pits at the end of lap 6, but his lack of speed suggests it isn't merely for a tyre change. The Swede reports a power steering issue and subsequently climbs from his car.

"My tyres are getting really hot," moans Verstappen. The Dutch youngster's frustration is clearly getting to him, the Red Bull constantly out of shape he pushes to the limit in his bid to pass Magnussen.

Inevitably, Verstappen spins in T1 as he pushes too hard, losing positions to Grosjean, Ricciardo and Hulkenberg as the Red Bull rotates the full 360. Grosjean and Ricciardo do well to avoid the spinning Dutchman.