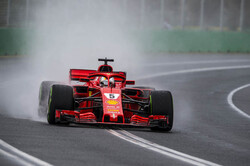 As forecast it is wet and it is anticipated that it will remain wet for much of the day including this afternoon's all-important qualifying session - indeed, officially there is an 80% of rain this session. However, with conditions tomorrow expected to be similar to Friday's the team's face a quandary in terms of set-up.

As far as yesterday is concerned, Lewis Hamilton topped the timesheets in both sessions, but in FP2, on the longer runs the gap to the opposition was much smaller than in the opening session.

It was a pretty uneventful day other than a few offs and a couple of technical issues, while even McLaren had little to complain about following a slow start to the day.

All that said, one man who isn't happy is Daniel Ricciardo who has been handed a grid penalty - for his home race - for not staying above the minimum time set by the FIA ECU under the red flag caused by a piece of timing wire fell on to the track. Needless to say the ever-cheerful Australian was not best pleased, nor was his team or indeed the home fans.

That said, the inclement conditions do at least allow Ricciardo and his Red Bull teammate to make up for the engine advantage enjoyed by Mercedes on the straights.

In the moments before the start of the session there is work going on at the rear of Stroll's car, the Canadian understood to have a gearbox issue which could side-line him for much of the next hour.

The lights go green and Grosjean and Hulkenberg lead the way, both on the full wets. However, with the track nowhere near as wet as it was earlier it is anticipated that Inters will be the norm before much longer.

Indeed, Alonso heads out for his install lap on the green-banded Inters.

All complete the one install lap, while Alonso looks as though he might have made the switch to Inters just a little too early.

We say "all", but in fact the Red Bull duo, Vettel, Leclerc, Sirotkin and Hamilton opt to remain in their garages and watch.

Hulkenberg is the first driver to head out for a second run, and now on the Inters he looks set to be the first to go for a timed lap. Leclerc and the Toro Rosso duo join him.

The German crosses the line at 1:40.863 after a somewhat hair-raising lap including at least one close encounter with the walls.

As Hulkenberg improves to 39.082, Hartley repeats his call that conditions are improving with no standing water.

As Hulkenberg continues to lower the benchmark, Vandoorne is the second driver to post a time, the McLaren driver stopping the clock at 41.148. Shortly after, Verstappen bangs in a 37.419 despite a worrying wobble at T9. The youngster subsequently admits that it is the white lines that are causing the problems.

Thoughts of that penalty fade away as Verstappen improves with a 35.548 and Ricciardo goes second with a 37.907. Moments later however, Vettel splits the Bulls with a 37.522.

Vettel is subsequently demoted as Ricciardo and Alonso improve, the Spaniard claiming that it will soon be possible to switch from Inters.

Approaching half-time, only 14 drivers have posted times, though everyone has completed at least one lap.

As Hamilton heads out again, Verstappen is back in his garage and out of his car, the youngster looking fairly pleased with his work thus far.

Raikkonen posts 37.005 to go fifth, slotting in behind his Ferrari teammate.

A 36.540 sees Hamilton go ninth. Next time around however, he goes quickest in S1, as Bottas also looks set to improve.

Indeed, the Iceman complains of a ten-second delay between being given advice over the radio regarding something happening and the incident actually occurring.

With just under 20 minutes remaining, along with Stroll the Force India pair are the only drivers yet to post a time.

Hamilton is advised that his "only loss to Valtteri" is traction at the exit to Turns 9 and 10.

If these conditions were repeated this afternoon it could make for an interesting grid, what with Alonso, the Toro Rossos, Sirotkin and Hartley all in the top ten.

Stroll heads out, his team clearly having resolved his gearbox issue. The Canadian subsequently posts 36.441 to go 14th.

As Sirotkin reports that his rears are getting "really hot" at the end of the lap, Alonso heads out again, the Spaniard still on Inters despite his previous claims that it was time for slicks.

With just over five minutes remaining it looks as though the Panthers might finally be coming out to play.

Verstappen is back on track, the Red Bull driver still sticking with the Inters.

From out of nowhere, Sainz goes quickest, the Spaniard going purple in the first and final sectors.

According to the screens - and you can take that with a pinch of salt - Vettel is on track on ultrasofts. Ericsson and Raikkonen also.

Indeed, now Bottas and the Toro Rosso duo are on the purple-banded rubber as Verstappen, on Inters, is warned "no heroics".

Verstappen improves to 31.680 thereby wresting the top spot from his former teammate.

However, Vettel posts 26.067 having gone quickest in all three sectors on the ultras.

Alonso is clearly miffed at McLaren's strategy, questioning why the team has stopped running just when conditions were improving. "What a disaster!" he moans. Indeed, Vettel's pace, straight out of the box, clearly backs up the Spaniard's claim that conditions were good enough for slicks some time ago.

Gasly is eleventh, ahead of Hartley, Sirotkin, Stroll, Grosjean, Leclerc, Magnussen, Hulkenberg, Ocon and Perez, the Force India pair opting not to run.