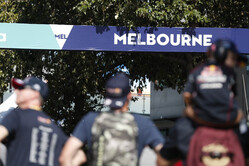 The FIA has confirmed a number of changes to the Albert Park circuit ahead of this weekend's Grand Prix.

Also, the kerbs on the exit of Turns 13 and 14 have been renewed, using 50mm negative kerbs.

As previously reported, there are three DRS zones in Melbourne.

The first detection point is 170m before Turn 11, with the Zone 1 activation point coming 104m after Turn 12.

The second detection point, which is shared by Zones 2 and 3, is 13m before Turn 14.

Tyre options are the same as in 2017, soft, supersoft and ultrasoft.

Last year's race saw race-winner Sebastian Vettel on a one-stop strategy, starting on the ultrasofts and then switching to a new set of softs. A similar strategy was used by the next three drivers, while fifth and sixth-placed Max Verstappen and Felipe Masa started on ultras before switching to supers.

However, Pirelli is hoping that the softer compounds this year, as witnessed in Barcelona, will lead to more teams adopting a two-stop strategy this Sunday.