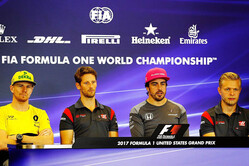 The schedule for the official FIA press conferences in Melbourne reveals some familiar names but a revised format.

After several years whereby as many as six drivers and team bosses and technical directors would face the media, last year the FIA's communications boss Matteo Bonciani gave the press conference format a much needed change.

Both the drivers' and team bosses press conferences were split in two, each featuring three or four guests. Other than the delay between the first and second part of the press conference it appeared to be well received and seemed to encourage the participants to talk more.

For Melbourne however, both the drivers' and team bosses press conferences will feature just three guests.

Thursday will see 2017 title rivals Lewis Hamilton and Sebastian Vettel joined by Daniel Ricciardo, while Friday sees the 'big three' in terms of team principals, with Toto Wolff, Sergio Marchionne and Christian Horner sure to have plenty to talk about… all three having been somewhat vocal over the off-season.

In a further change, Friday's press conference will take place at 14:00 (local time) placing it between the two opening practice sessions rather than after FP2 which has been the norm.