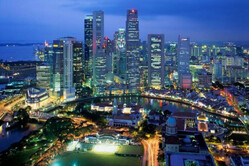 As Pitpass has previously reported, Vietnam and Argentina are close to hosting rounds of the Formula One World Championship.

Now, Auto Motor und Sport confirms that in addition, Miami could join them on the F1 schedule, possibly as early as next year.

Hanoi and Miami will "almost certainly" be part of the calendar next year, though a race in Buenos Aires could be delayed as talks continue over circuit upgrades and hosting fees.

The Miami and Hanoi events would be street races however, in a new twist, it is understood that representatives from Formula One Management (FOM) are to choose the track layout, obviously seeking the backdrop that will come across best on TV.

The Hanoi track, based in the very heart of the city, will be "more than five kilometres" (three miles) and has apparently already been approved by the FIA.

The Miami layout, which will be of a similar length, and will feature 17 turns - most of them 45 degrees no doubt - is understood to resemble (groan) the layout in Baku.

Miami is one of five cities scheduled to host a London-style street event this year, the others being Shanghai, Moscow, Berlin and Marseille.

Once both the Hanoi and Miami layouts have been approved by Charlie Whiting, Hermann Tilke will begin the business of creating the actual tracks.