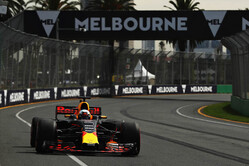 In a desire to further (artificially) spice up the action, the season opener in Melbourne will feature no less than three DRS zones.

Since the introduction of DRS in 2011, though it has resulted in more overtaking, many fans regard it is artificial, especially when the driver who has been overtaken will often re-take the position a lap later at the same part of the track using DRS in the same fashion as the driver who previously passed him.

With overtaking - even with the 'benefit' of DRS - down 50% in 2017 compared to 2016 - the sport's powers that be, rather than revising the aero regulations are clearly hoping that more reliance on the system will see a few more moves.

While most circuits have two DRS zones and some only one, Melbourne will feature three.

In addition to the first zone, whose activation point is before Turn 1, and the second before Turn 3, a new zone will be situated at the exit of the fast T12 with the aim of allowing drivers to carry the momentum on the run to the right-hander at T13.