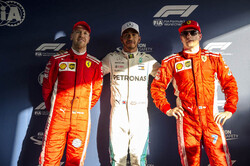 Lewis, that was a lap of some commitment to take the record here, seven pole positions. How does that one feel?

Lewis Hamilton: You would think that with the results we've had in these years, it would be the norm. But it doesn't. It's still just as intense and my heart is racing, I wish you could feel it right now. It's great to see this crowd here. Thank you so much for all coming out. I'm so grateful to the Aussies having us here every year and mostly the generally good weather but a beautiful city. And a lot of British flags here, so I'm really grateful for it. But I'm so happy with that lap; it was such a nice lap. And, you know, I'm always striving for perfection and that was as close as I could get.

More than six tenths for pole position. We've heard some talk about 'party mode'. Was party mode engaged? Was it party time in the car today?
LH: I'm always in party mode, so you know... No, what was surprising was to see how quick the Ferraris were. I mean I don't really know... during that lap I was in the same mode that I was in before but it was just really hooking up the tyres, getting them at the right temperature and then putting the lap together. I had good sectors before, maybe the first lap of qualifying but after that I had to put them together so...

Phenomenal job. Congratulations. Great job today Kimi, a phenomenal lap from you. Talk about your lap, talk about your pace today, a great job for Ferrari.
Kimi Raikkonen: I think it was a pretty decent job. But obviously the lap time difference is still pretty big but it wasn't a very straightforward session, because of the weather this morning and the disturbance in the last qualifying but we have to be happy about where we are starting but there is still an awful lot of work to be done to improve things, but not too bad.

Great job, Kimi, well done. Sebastian, maybe not the day you were hoping for, the pace of the looks good, but just that massive push from Lewis at the end. Are you happy with today?
Sebastian Vettel: Yeah, I think we can be. Yesterday I wasn't happy; I didn't really feel the car. It just coming better in qualifying. I think the last lap I had a bit of a moment into 13, I tried to brake really late; it didn't work. But yeah, it was really close. Exciting for us as it was that close. A shame that Lewis had quite a big gap at the end but I guess his lap was pretty good. Looking forward to tomorrow, we did improve the car today and see what happens tomorrow.

We know that Mercedes always turn it on on Saturdays. But for Sunday for tomorrow how confident are you that you can take it to those guys and we get a proper fight for the win?
SV: Yeah, I hope they did turn it on today, as that means they have turn it off tomorrow. I think it's very close. I think we saw yesterday in the long runs that the pace is very close, so let's see. It's not the easiest place to overtake but who knows, if we have an opportunity at the start and then in the race you never know. Really happy for the team, it's a good result, so let's get going.

Lewis, that was some mighty lap, but tell us about the journey to it, as it didn't look straightforward today.
LH: It definitely wasn't straightforward. It was not the easiest of sessions. It was a real surprise to see how quick the Ferraris were, from already Q1. The speeds they had on the straights; they've obviously made an improvement in their power mode. I think we were similar speed through the corners but definitely their power mode was quite strong. And that remained the same through the session. But obviously getting out and getting the tyres working optimally and staying in the right zone through the whole lap was definitely difficult, it was always is here, particularly with the rears. Yeah, getting the balance and putting the sectors together, obviously we had some runs, or at least one on used tyres, and then you had that break and then the incident. It was tricky. But that last lap was the best of this weekend. I'm very, very happy with that lap. It was one of my best I would.

You look in good shape for the race. You were quick on the two harder compound tyres in the long runs yesterday. The only disappointment I guess is that they're on your own against these two tomorrow; Valtteri in the wall unfortunately?
LH: Yeah, that's OK. It's not like I've not been there before, fighting two Ferraris, in my career. Of course it's always going to be tough having two red cars, or a red car either in your mirror or ahead, fighting with them. They are a great team. But we are the best prepared we can be. I am excited. We had a great crowd here today. It was great that it dried up. And it was progressing. The track was getting better and better through qualifying, so you were constantly discovering new grip, new improvements as you go along and I guess that's why I'm as happy as I am.

Kimi, great performance, it looked pretty close in Q2, first runs of Q3 as well, Lewis used the word 'surprised' to talk about the performance of Ferrari there, were you surprised them when he pulled out that lap?
KR: We didn't really know what to expect, it's the first qualifying so everybody's been a bit unsure of where you are against the others and obviously today was like this. If you purely look at time differences it's bigger than for sure we want but I think it wasn't very straightforward, the whole day with conditions and everything. We have to see in the next ones but I think everything was more or less OK. One mistake in Q2, lost one run and obviously then we used, like a half a lap used tyres in the first try but yeah, I think feeling-wise, not too bad. For sure things could be better here and there, we try to make a good job tomorrow and keep working and see what we can do.

Seb, obviously, strategy played a part in your win here last year. There are two of you, one of him, there's Red Bull starting on Supersofts, lots of different permutations: how do you see the race panning-out tomorrow?
SV: Well, I don't know. Depends on how we get off the line and then hopefully we can play two against one. I think in terms of race pace we should be closer. We were closer yesterday and then we see. It depends how close we can be. Yeah. I think it also depends. We have more cars now in range. So, it changes probably a little bit the race as well. So, we'll see.

(Yianni Mavromoustakos - Talkingtorque.com.au) To all three drivers, did the track conditions affect your times significantly - and if so by how much? The dampness, as it started to get a bit drier throughout from Q1 to Q3.
LH: Oh, no, it was already dry from the beginning. The tracks generally evolve, the temperature was coming down in this session but the track just grips-up as we apply more and more rubber to the road. Obviously, this morning's practice, the rain just resets the track a little bit. So, it just kept progressing and getting faster and faster throughout the session.

(Christian Menath - Motorsport-Magazin.com) Question to Seb: are you concerned by the gap to Mercedes and do you think it was due to the 'party mode' from Lewis' engine?
SV: I don't know. I haven't seen much of the qualifying. I think I had a little bit in hand. I messed up a bit in the final sector, going into Turn 13. So not ideal from my side but still, felt like a good lap and a good session. The car was coming alive so I'm pretty happy with what we did. Obviously the gap is bigger than we want it to be. I don't think it was very close, seven-tenths obviously is quite big. So, some homework for us, but yeah, as I said, tomorrow, we've seen many times now, 2014, 2015, 2016, 2017 that, usually on Sunday, things get a little bit closer. We bet on that.

SV: What were you doing before?

LH: I was waiting to put a good lap in. Wipe the smile off your face!

[off-mike question - You have mentioned looking forward to the party mode]
LH: Who did?

[off-mike question - I think you said at some point...]
LH: I've never heard of that suggestion, the Party Mode - but it sounds pretty cool.

(Frederic Ferret - L'Equipe) Question to the three of you. Are you surprised by the choice of the tyre of the Red Bulls?
LH: I'm not surprised, it is a better tyre. It is a better tyre so they will be very strong. The only scenario... the difficult thing is, being that's it's generally a one stop, tomorrow they'll have to go to either the ultrasoft or the soft at the first stop. But the tyres are quite close. They will most likely be able to go longer and remain at a very decent pace. Strategy wise it's probably not a terrible thing but it'll be interesting tomorrow for sure.

Kimi, any thoughts?
KR: No, free to do what they want.

Did you think about it?
KR: For sure. There are a lot of things that we think about and we try to chose the best that we think is going to work for us but obviously, there's a lot of options that you can do. To be honest, the end result, if you purely take the speed, might not be an awful lot different.

To phrase it slightly differently, why didn't you do it?
SV: Because we believe what we did is better for the race.