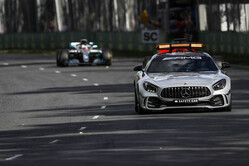 Mercedes team boss Toto Wolff gives the lowdown on the turn of events that saw Lewis Hamilton miss out on a certain win in Melbourne.

"We were trying to maintain the correct gaps and build enough of a gap to Raikkonen in order to avoid the possible undercut," explains the Austrian, "while also have enough of an advantage to the Haas cars in case of a Safety Car.

"At that stage, everything was pretty much under control. We took a little bit of a risk putting Lewis onto the soft tyre to go until the end, but it was the only chance to avoid Kimi jumping us.

"The pace was good and then we calculated the Virtual Safety Car gap that was needed. Our computer said it was 15 seconds, which was the necessary time in order for Vettel to jump us.

"We were always within this three or four second margin," he reveals. "Then suddenly the cameras showed Sebastian coming out in front of us. We have no explanation yet.

"It could be just a very unlucky situation that Sebastian was making it into the pits and accelerating between the two Safety Car lines. I don't know, this is just a hypothesis at the moment.

"Therefore, he would have lost much less on VSC than Lewis, who had to brake pretty hard in a high-speed zone. The software or system we have been using for five years just gave us the wrong number.

"While the W09 showed impressive speed and encouraging pace throughout the weekend, it was disappointing to lose out on a potential victory in this way. The only thing we could have done was try to push more after his pit stop and try to create a bigger gap, but knowing that the tyre needed to go another 40 laps or so, it was very important not to stretch them too much. And he was going quicker than Sebastian anyway.

"It was clear we had to react to Kimi's stop due to the risk of the undercut, which committed us to that one strategy and left us exposed to a Safety Car or VSC. So the gap grew. And we knew that the gap was good enough that even under VSC we would still stay in the lead.

"If we knew it would have been three or four seconds more, we would have pushed a bit more with the tyres, even with the risk at the end of the race.

"Like always in motor racing, with the VSC or normal Safety Car, sometimes you are lucky and sometimes it bites you. We were bitten."