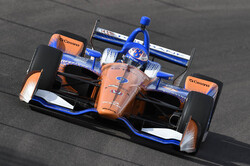 The word 'legend' is thrown about so easily these days that it has just about lost its meaning. However, in the case of Mario Andretti, legend doesn't go far enough.

The Italian-American has not only raced just about everything on four wheels, he has won races, indeed titles, be it F1, Sports Cars or IndyCar.

In the wake of Sunday's season opening Australian Grand Prix, which featured just 5 overtakes, Andretti believes F1 has missed up a golden opportunity by not following IndyCar's example and restricting the reliance on aero.

In a bid to reduce costs and improve the racing - both of which are seemingly on F1's 'to do' list - this season IndyCar has introduced its own Aerokit and done away with the teams' own versions. In addition to attracting a number of new teams this season, the first race of the year witnessed a record number of passes.

Meanwhile, the much-hyped new aero regulations for F1 last year resulted in 50% less overtaking than the previous year, and as fans and drivers call out for changes, the sport's technical boss, Ross Brawn warns it may take until 2021 before anything can be done.

"I think the series, the management have done a great job in tweaking things," Andretti told Motorsport.com, referring to IndyCar. "They're doing the right thing with the aerodynamics of the cars and coming back to more of a pure-looking single-seater, open-wheel car which I think was something all of the open-wheel aficionados wanted to see.

"Unfortunately, last year's cars started looking more like a sports prototype with all the winglets and all the bullshit that was hanging over, but what they've done, I think is personally what Formula 1 missed out on.

"They reduced the downforce of the car which is an element," he added, "they still gave them good downforce with the ground effect because it does not create turbulence. But with the smaller wings, you can stay near the guy's gearbox and you can have a competitive overtake.

"I think personally that's where F1 missed it, they gave them more mechanical grip with wider tyres that gave them bigger weights which created more turbulence. And by doing bigger wings, they shorten the braking points even further which almost eliminates the chance of overtaking.

"You have DRS and all that, which you really need more than ever now, but at the same time even with the DRS, you've got to be able to suck up to somebody's gearbox coming off a corner and you cannot use DRS until you're on the straightaway."

A legend speaks, but is anyone listening?