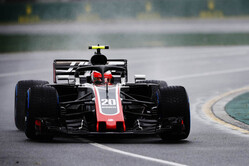 The American squad placed both its drivers into Q3 for only the second time in team history. The last time Haas F1 Team had both its pilots in the final round of qualifying was at the 2016 Japanese Grand Prix when Grosjean qualified eighth and Esteban Gutierrez qualified 10th. The 2018 Australian Grand Prix marks the best collective qualifying effort by Haas F1 Team, and it comes in the organization's 42nd race.

Before Grosjean, Magnussen and the rest of their Formula One counterparts participated in knockout qualifying, they had one final practice (FP3) to dial in their racecars for a quick lap around the track. Rain left the circuit saturated, which meant drivers first ventured out using the Pirelli Cinturato Blue full wet tire. But with the rain having abated, the track soon began to dry, allowing teams to transition to the Green intermediate tire.

Grosjean ran six laps and set the 15th-fastest time with a 1:36.171 on his fifth tour. Magnussen tallied seven laps and earned his best time on his fourth lap – a 1:36.807 that put him 17th overall. Both drivers earned their quick times on intermediate tires.

Romain Grosjean: "Everyone's very happy and it reflects the hard work from everyone on the team. Our result confirmed a little bit what we saw in winter testing. I can push the car as much as I want, which obviously makes me very happy. It was a good job by Kevin (Magnussen) as well – getting both cars into the third row of the grid tomorrow. It's going to be pretty amazing being there. Points could be possible. Obviously, we want to keep our positions. We're starting in a good place, but we'll see tomorrow what happens. This is a good start. We can be very proud, but we need to keep pushing."

Kevin Magnussen: "The car was nice to drive in qualifying. It was just there, and performing. I was able to push brake points – get off the brakes earlier and earlier with every lap. It wasn't doing anything unexpected, which was really nice. I'm looking forward to tomorrow starting in P5. We have some quick guys behind us, and we'll have to do well to keep it that way. We'll be doing all we can to get a good result. We need a solid start to the season and we need to capitalize on today's qualifying result."

Guenther Steiner: "Not a bad Saturday. We delivered on what we showed since the beginning of the season. It's tough, our competitors are strong, and we need to keep our guard up. It's a fantastic day for the team. They can be proud of what they did. In your third year, to be starting fifth and sixth, it's fantastic and down to them. Tomorrow is another hard day. We just need to try to get as much as we can in terms of points. It's been a very good day for Haas F1 Team."