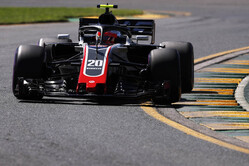 Both drivers began FP1 on the Pirelli P Zero Red supersoft tire before transitioning to the Purple ultrasoft. Grosjean's quick time of 1:25.730 came on his 15th lap shod on ultrasofts. He ran 24 laps and was the seventh-fastest driver. Magnussen's best time was a 1:27.035 on his 10th lap, also set on ultrasofts. He ran 13 laps and posted the 17th-quickest time. Both drivers dealt with the typically slick track surface in Melbourne, as it only sees racecars about once a year. This makes grip hard to come by, especially early in a race weekend.

Speeds picked up and lap times dropped in FP2. Grosjean wrapped FP2 as the sixth-quickest driver with a time of 1:24.648, which was 1.082 seconds better than his best lap in FP1. His quick time came on the 13th of his 34 laps shod on a set of ultrasoft tires. Magnussen shaved 1.789 seconds off his FP1 time with a lap of 1:25.246 to jump to ninth fastest. His fast lap came on his 13th tour as well, also while utilizing the ultrasoft tire. He completed 30 laps.

Romain Grosjean: "It's been a good day. I'm happy with the car and the guys did a great job getting everything ready. We had a successful winter test, and it's good to confirm that the car is up there on a different track and with different temperatures. Obviously, it's early stages and we need to keep up the work and keep building everything. There are areas where we can improve the car but, generally, I'm very happy with how today went."

Kevin Magnussen: "I'm fairly positive, but we still have some work to do. I had quite a few abnormal issues today - nothing big - but little annoying issues with small things that were breaking. That stopped us from running as much as we'd hoped for, at least on my side. We got at least one run that was representative where I got to feel the car, and I was happy with the feeling. I'm looking forward to trying again tomorrow. Obviously, we don't know what the weather's going to do, but if it's dry, I have a feeling we have a good package."

Guenther Steiner: "Not a bad day, but not a perfect one either. We had some small issues with Kevin in FP1 which carried into FP2. In the end, though, we came out not too bad. We have a good understanding of what we can do. We've got some more work to do tomorrow, but then I think everything changes a bit, because it's supposed to be raining all day long."