Steiner puts pace down to better understanding of tyres 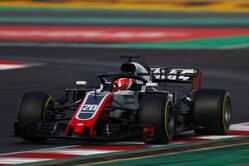 There were a number of times over the course of the second week of testing, when observers were forced to do a double-take when an unexpected name appeared near the very top of the timesheets.

On at least two of the occasions the driver was at the wheel of a Haas, Kevin Magnussen on Thursday and teammate Romain Grosjean on Friday.

In the Dane's case, though he finished second overall on his final day in the car, and 1.178s adrift of Sebastian Vettel, he did it on the supersofts while the German was on hypers.

The following day Grosjean conformed the VF18's pace, posting a best 1.191s adrift of Kimi Raikkonen, and on the ultrasofts, but at the end of a longer run than his teammate.

Though only McLaren completed less laps, Haas, which encountered most of its issues in the first week, left Barcelona having made a big impression, leaving many wondering whether the American team could be one of the big surprises of 2018.

Team boss Guenther Steiner puts much of the improvement down to the tyres and the American outfit's better understanding of them.

"The ultrasofts, everyone seemed to have the same problem," he continues. "Nobody really goes from the supersofts to the ultrasofts any faster. But we tried it, and the conditions here from 11:30 onwards don't go rapidly down, it's just warming up. We worked on the ultrasofts and we got a little bit more understanding. All in all, we're pretty OK."

Like rival teams, the cars that appear on the grid in Melbourne will be different to those packed away in Barcelona as updates and modifications are carried out in the aftermath of the tests.

"There have not been many updates," said the Italian, "we've got a few bits and pieces.

"We had a few reliability issues with body parts in the first days," he admits. "We need to fix them and that will already be an upgrade to what we are running now, as we are currently a little bit compromised.

"We'll get that all fixed and then add a few parts that we had planned from before."

Asked the inevitable question about the pecking order, he replies: "I hope it's us, obviously!

"The top three? I think up to now Mercedes was a little bit ahead, but again, it's not all done yet. They are very close as well. Red Bull picked up and the Ferrari is not bad. This morning they were really good and yesterday, so I think it will hopefully be very interesting.

"The midfield will be much of the same it looks. Because it's so close, it's difficult to estimate at the moment. We'll find out in Australia."