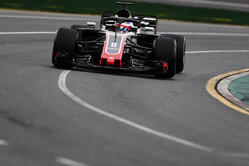 Ever since Kevin Magnussen and Romain Grosjean posted their impressive times in pre-season testing, without needing to resort to the hypersoft rubber, there has been speculation that Haas' third season in F1 could see the American outfit spring a surprise.

When Friday practice indicated that the team's Barcelona form was no flash in the pan, Fernando Alonso, in typically gracious form, suggested the step forward had more to do with Haas' close ties to Ferrari than an actual step forward by the team or its drivers.

"They obviously have a Ferrari replica of last year," said the Spaniard, "and Ferrari were winning here."

Following today's qualifying session which saw Magnussen and Grosjean claim sixth and seventh on the grid - the team's best ever qualifying result, and actually means fifth and sixth following Daniel Ricciardo's penalty - the pair hit out at Alonso's comments.

"It's the same thing every time we're fast," said Grosjean. "It was the same thing last year, then we were 'Ferrari B'. It's not true and it's not nice for the people that work at Haas."

"I'm really proud of the team, and impressed," added Magnussen. "We've got a car that's competitive here, it's the fourth best car on the grid this weekend.

"This team is the smallest on the grid, and if not the lowest then one of the lowest budgets and the least amount of people and resources," he added. "And yet we've got the fourth best car on this track in qualifying."

Of course, finishing ahead of former employers McLaren and Renault gave the Dane an extra thrill.

"It's not something I focus hugely on but I would love to beat them," he admitted. "It would be a great thing to beat those two teams of course.

"They've got their own opinion," said team boss Guenther Steiner of the replica jibe. "They don't have all the information, and making statements like this without the relevant information is a little bit of a case of before you speak, you should know what you talk about.

"They can have their opinion, everybody's free to have one. And I've got my opinion."