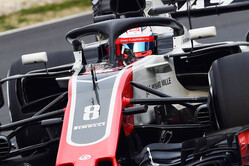 As if having his home race back on the calendar this year, meaning that for the first time ever he will get to line up on the grid for the French Grand Prix, Romain Grosjean is also seeking to contest that other French classic, the Le Mans 24-hour race.

"Le Mans is one that I'm looking at," he told Racer magazine. "If there's a great opportunity I may just jump in.

"It would be five weekends in a row or something like that," he continued, "but I've got to train for a triathlon first.

"I'm trying to do a first triathlon this year, so I have a deal with my wife who says if I go and do another race I have to drop that one! I'd pick Le Mans."

Contesting the Le Mans event would add to an already hectic schedule for the Haas driver, for this year's running of the classic race falls between the Canadian and French Grands Prix, the latter being the first in the sport's first ever triple-header which sees three races (Austria and Britain being the others) in as many weeks.

"I haven't even asked the team," admitted Grosjean. "If there's an opportunity I will ask the team for sure and we'll see what we can do. If they don't want me to race, fine, I can fully understand. There are already a lot of races."

Should he get a Le Mans drive Grosjean we meet up with plenty of familiar faces, not least Fernando Alonso who is contesting this year's WEC with Toyota.