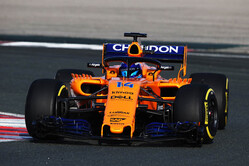 While nobody is going to argue with the need to protect drivers as much as possible, especially in light of the accidents in recent years which have robbed motorsport of a number of talents, many feel the whole thing could have been handled better.

Days ago, at the launch of his team's contender, Toto Wolff admitted that he would dearly love to take a chainsaw to the device, the Austrian feeling it blights the look of the W09.

While Fernando Alonso admits that the aesthetics could be better however, the Spaniard insists the introduction of the Halo is not up for debate.

"Yeah, I'm sure of that," he told Sky Sports when asked if he thinks fans will get used to the device.

"The aesthetics aren't the best at the moment," he admitted, "and in the future I'm sure that the sport and the teams will find a way to make it a little bit nicer, for the fans, you know, and for the cars to look a little bit better."

Writing on the Red Bull website, Daniel Ricciardo was equally defensive of the controversial device.

"I think it's going to be alright," he wrote. "Don't get me wrong, I don't love the look of it, but I think it'll be fine and we'll have other things to talk about pretty quickly, especially once the racing starts and we have the championship beginning to take shape.

"Remember back in 2009," he continued, "the year that Brawn won the championship, and the cars that year looked so different with the small rear wings, almost like F3 cars? People threw their hands up and talked about it a lot at the start, but then we all got used to it and just moved on. I reckon the 2009 look was more dramatic than the halo and how long it'll take people to get used to it."