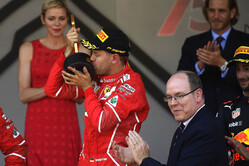 Nonetheless, since the formation of the Formula One World Championship in 1950 - indeed long before - the streets of Monaco have hosted a Grand Prix, along with Italy and (for now) Britain one of the ever presents on the calendar.

However, while a question mark hangs over the future of the British Grand Prix, so too there is doubt as to the future of Ferrari, leaving some fearing that the only time the prancing horse will be seen on the streets of the Principality post-2020 is in historic events or adorning the supercars of the rich and (in)famous.

Prince Albert II, admits his fear that Sergio Marchionne might carry out his threat to take Ferrari out of F1, the Italian team having made no secret of its unease with the sport's new owner's plans for the future, be it in terms of engine regulations or the all-important prize pot.

"It's true that Ferrari and Monaco are the two most important things to F1," he told The Independent. "There is such a history and such a mystique around the name of Ferrari and the success that it has had.

"The whole imagery and legend of the red cars and what they mean to the world of automobiles and racing itself. It is hard to imagine F1 without them."

However, at a time the likes of Zak Brown at McLaren and Christian Horner at Red Bull are clearly taking sides ahead of what could be a damaging stand-off for the sport, Prince Albert is not siding with Ferrari (and Mercedes), indeed, he is impressed with many of the changes Liberty has made in its first year in charge.

"I think this new emphasis on more communication and a show is good for the overall image," he says. "Of course it complicates the procedures a bit but I think it's interesting, especially to attract a new public and have more exposure to different markets, different age groups and different levels.

"F1 has to keep appealing to sports fans and not only to motor racing fans but to possibly a wider public," he admits, "I don't know if it's only social media or different electronic devices that will do that.

"How to establish more of a personal link to the drivers and to the teams - these are things that you have to think of."

A keen environmentalist, Prince Alert was an early supporter of the all-electric Formula E series, and welcomed the series to the streets of the Principality for the first time last year. He believes that in time race fans will warm to the series and that it could eventually rival F1.

"I think there is space for both F1 and Formula E," he says. "Of course there is a great nostalgia that goes around the historic formula, and that is very much a part of the history we try to showcase in Monaco. But I think certainly, in terms of interest, it will take a few years but it will slowly become a rival, especially if big name drivers join the formula."