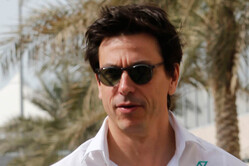 While today's opening practice sessions appeared to confirm that Mercedes and Lewis Hamilton are still the dominant force in Formula One and therefore probably on course for another title clean sweep, the outcome of the political battle currently going on behind the scenes, though equally hard-fought, is not nearly as clear cut.

On the one hand one has Liberty Media which as the new owner of Formula One has made clear its intentions. In its determination to reap the reward of its $8bn purchase it is seeking to make the sport more attractive, not only to existing fans but to new fans.

In seeking to make the sport more attractive to new fans, one of the company's main aims is to level the playing field in order that the sport is no longer dominated by one or two teams and that essentially all ten have a chance of winning, even if only occasionally.

To assist in levelling the playing field it is looking to redistribute the prize money awarded to the teams, and while doing away with the bonuses paid only to some, a budget cap is to be introduced.

At the same time, the sport's governing body is assisting Liberty in its ambitions, the two working together to produce a new engine formula, amongst other things for 2021.

While the financial side of things is clearly the main sticking point - even though Liberty has yet to announce its intentions - the initial proposal for the engine formula has already had Mercedes and Ferrari in uproar, the Italian outfit - not for the first time in its long history - threatening to walk away from F1.

Following today's war of words between Maurizio Arrivabene and Christian Horner over Ferrari's recruitment of the FIA's deputy race director Laurent Mekies, the Italian team accused of breaking a gentleman's agreement in terms of gardening leave, it was pointed out that the obvious (bitter) division between the teams will only compromise their efforts as they prepare to go head-to-head with Liberty Media and the FIA over the future of the sport.

"This is as much a battle on track as it is off track for an advantage and it has always been like that," said a clearly world-weary Toto Wolff.

"We have all the very best for our teams at heart," he continued. "We have different agendas, depending on the strength in the team and how we view the future and then each of us have a holistic side and probably also very personal opinion, how we see the sport going forward. And we are going to be vocal about it and say it.

"It is clear that the current governance and how the rules are being made is not very functional, there is too much different opinion when the agenda's on the table and we need to sort it for 2021, for the best interest of the sport, but it shows that the debate that we just had a minute ago is that it needs tight rules to have a common legal ground to fight on track and if there is no rules and it's not written down in the regulations it doesn't work."

"We're about the only teams in Formula One that do agree," said Christian Horner, who over the winter has accused Ferrari and Mercedes of working as one towards their own joint agenda. "My view on this is very simple: trying to get a consensus between teams that have got varying objectives, different set-ups, is going to be impossible, so it's down to the commercial rights holder and the FIA to get together, come up with a set of regulations, what is the financial framework, what is the distribution that they want to have, put it on the table and it's down to the teams whether they want to sign up to that or not.

"Of course, as Toto says, there will be a lot of positioning, the media will be used, it's history repeating itself. It happens every five or six years, every time the Concorde agreement comes up for renewal, but my feeling is, Liberty, together with FIA, need to get on the same piece of paper to say this is what we want Formula One to be, this is the financial distribution surrounding it, here's the deal and laid out to the teams."

Asked about Sergio Marchionne's threat to take Ferrari out of F1, Maurizio Arrivabene kept his response short and not particularly sweet. "I'm not commenting the statement of my chairman," he said. "My chairman knows very well what he's talking about and my only suggestion is please take him seriously."

When also asked about Marchionne's threat to take Ferrari to a breakaway series, and how practical such a move might be, Wolff said: "More than practicability, it is about responsibility for Formula One.

"We are all carrying the torch of a great series and a great brand that was built 40 or 50 years ago and has tremendous value and nobody is taking that lightly," he continued. "Headlines are being created based on things that are being said and like Christian mentioned before, it is about the new Concorde agreement going forward, everybody's trying to position themselves but all the time with respect for the series.

"And comments that are being made maybe from Mr Marchionne's side also, it is also because he cares I guess. I don't want to speak for Maurizio but we all care for Formula One and we all have a certain vision and perspective of Formula One and how we want to see it going forward and it needs to fit that opinion and this is why these statements are being made. They of course are being blown up in the media like it has always been the case but I can assure you that whatever is being written is that we care a lot about responsibility and we owe it to Formula One and we need to give it all.

"We have at least three more years together in this great sport, regulated by the FIA, owned by Liberty, run by competent men and we just need to give our input support in the best possible ways so it's great and we're not devaluating it."