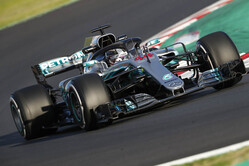 One of Toto Wolff's more infuriating habits in 2017 (and indeed, 2015 and 2016) was to constantly play down the fact that his two drivers had the best package on the grid, the Austrian often attempting to suggest that his all-conquering team were the underdogs.

Heading into the season opener, Lewis Hamilton appears to have caught the 'bug', playing down talk that the W09 is the fastest car on the 2018 grid and therefore he heads into the season as hot favourite.

While, as in 2017, he didn't top the Barcelona timesheets, the W09 was clearly the most reliable car out there, never missing a beat and topping the mileage charts.

Speaking at a promotional event in Melbourne ahead of this weekend's Australian Grand Prix he urged fans not to fall for the hype.

"At this time of the year everyone is trying to hype someone else up and we are the perfect target because we are the world champions," he said.

"It's like trying to put all the pressure on to someone else because it takes the weight off of you," he continued. "But ultimately the pressure is divided on all of us because Red Bull seem to have done a great job with their car and it has a lot more furniture on it and should be a lot quicker this weekend with two great drivers.

"And then you've got Ferrari who were in a real fight with us last year and they will be no walkover, that's for sure. This year we expect them to be on it too.

"My guess is as good as yours this weekend," he admitted, "and I'm just trying to make sure I'm in the best position I can be and I understand the car and my tools, because as soon as you get on track the steps you take in terms of moving the car forward and improving the envelope you are working in is crucial. Every step has to be the right step."

Asked about Barcelona, where Mercedes never tried the hypersoft tyre and his and Valtteri Bottas' best times (both over 1.2s off Sebastian Vettel's pace) were set on supersfots, he said: "Everyone did different things. If you look at the Red Bulls, they never used their best race mode for example. I'm not sure if that's the case for Ferrari, but that's certainly the case for a couple of people.

"From what I understand, I think Red Bull and Ferrari are very close. Potentially we are either level, just behind or maybe just ahead of the Red Bulls, but this weekend they might bring a new upgrade, so it's going to be tight."