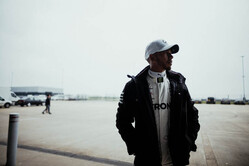 About to begin the campaign that could see him equal Juan-Manuel Fangio in terms of five world championship titles, Lewis Hamilton says that he hopes to agree a new deal with Mercedes before next weekend's season opener in Melbourne.

The Briton is out of contract at the end of the year, but unless he opts to follow former teammate Nico Rosberg's example and retire, few see him leaving the team with which he has won three of his current four titles.

"I hope it will happen before Melbourne," he said at the opening of the Petronas Global Research & Technology Centre in Turin earlier. "We have of course got this year to focus on, but it will happen.

"We have been talking and continue to talk," he continued. "It is quite a relaxed atmosphere for us because Mercedes know I am committed to them, and they have expressed they are committed to me. I sit here quite relaxed.

"Ultimately with contracts and partnerships you always want to work on how you can do better and to provide that service and vice-versa, by how you can extract more from each other so that is what we are working on."

The Briton heads to Australia - not for the first time - as red hot favourite following a pre-season test that suggests that once again Mercedes is the team to beat.

"We really have pushed the envelope so far in the past four years and that is why we have been the leaders," said Hamilton. "I go to the factory every week and see what it is happening and there is no coincidence that we are world champions and we are number one.

"The great thing is that we are always wanting to move forward. If I saw anything within my team that wanted to compromise and wanted to stand still then I would know that I am in the wrong place, but I don't and I am not.

"It is a new beginning for us this year. It is not like we are four-time world champions. We want to win that championship again and there is one more to get."