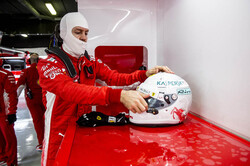 While the gap to Lewis Hamilton was 0.908s yesterday, Sebastian Vettel can at least console himself in the knowledge that earlier in the week he posted a best time that was only 0.340s off the Briton's best. On the other hand, while Hamilton's best was posted on the medium rubber, the German had to resort to softs.

Nonetheless, as both seek their fifth title, the German remains pragmatic in his approach to the new season.

"I think Mercedes is the favourite going into this year," he told Sky Sports, "so if we can be close... very close, closer than last year, then that would be great.

"It's a long year," he added. "Right now it's March and we keep going to the end of November."

Ferrari last won the drivers title in 2007 with Kimi Raikkonen, and while fans of a certain age will remember the 21-year gap between Jody Scheckter and Michael Schumacher, Vettel insists there is only one aim this year.

"You want to make sure you bring it back," he said. "That's our ambition and target, to bring the championships back to Maranello."

Reflecting on a test that saw him complete 218 laps, more than either Mercedes driver, the German said: "So far, things have been looking OK, but there has been very limited running for everyone, so it's very difficult not just for yourself to judge but also to judge compared to the others.

"To be honest though it's not that important in the first week," he admitted. "You just want to make sure the car is running. But that's been tough as well because there wasn't that much running."