Bottas to be awarded Bandini Trophy 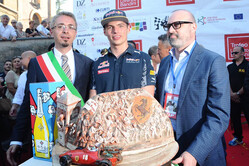 Valtteri Bottas is to be awarded the Bandini Trophy, becoming its 25th recipient.

The accolade, which is awarded each year for a commendable performance in motorsport, is named after F1 and Le Mans 24-hour winner Lorenzo Bandini, who tragically lost his life in an accident during the 1967 Monaco Grand Prix.

The unique and spectacular ceremony, which includes a 12km drive from Faenza to Brisighella to collect the award, will take place on Saturday 5 May.

Bottas will be driving there in style, at the wheel of the championship-winning W07 from the 2016 season.

Mercedes became the first constructor to be honoured with the award, winning it in 2015 for the team's dominant performance the year before.

The 2018 Bandini Trophy has united with Minardi Day, which takes place on 5-6 May at the Imola circuit, for a weekend of motorsport.

Mercedes will not only be running the W07 for Bottas at the Bandini Trophy, but is also taking a W04 from the 2013 season to Minardi Day.

Engineering Director Aldo Costa, who started his F1 career at Minardi as chief designer, will be behind the wheel of the W04 at Imola, while, Bottas will stop by to sign autographs before he heads off to Faenza.