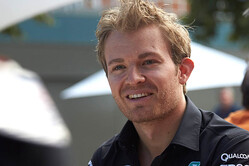 Hot on the news that he has been lured back to F1, albeit as a pundit with Sky Sports, Nico Rosberg, a number of whose wins are being shown on the broadcaster's dedicated F1 channel today in celebration of the deal, gave his insight into how his former teammate, world champion Lewis Hamilton, might be deposed.

Friends from their karting days as teenagers, it all went wrong for the German and the Briton when they became teammates in 2013 after Hamilton's shock switch from McLaren to Mercedes, joining Rosberg who had been with the German outfit since 2010.

While it started out friendly enough, the relationship slowly turned fractious and then outright hostile as the pair duelled for supremacy.

Ahead of the new season, Rosberg, who finally won out over his teammate in 2016, and then promptly retired, gave insight as to how her believes Hamilton can be beaten.

"The weakness Lewis has is a bit of inconsistency" he told Sky Sports. "He has these periods when he is just not on it and if you are able to pounce in those periods and really make the most of it, you can keep him down for a while longer.

"You have to make the most of it, absolutely," he continued, "and Sebastian did that pretty well last year.

"When Lewis has his good weekends he is almost unbeatable," he admitted, "he is unbelievably fast and maybe the best guy out there. The only way to beat Lewis is to be one-hundred percent with everything, do the perfect season. Otherwise there is no chance."

Referring to Valtteri Bottas, the man who replaced him alongside Hamilton, Rosberg said: "I hope that Valtteri can be even closer this year, because last year he showed some really big flashes of brilliance but it just lacked in consistency.